Sense of Community Alive and Well in Nanoose Bay 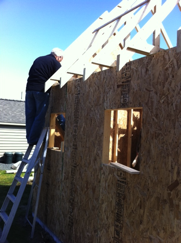 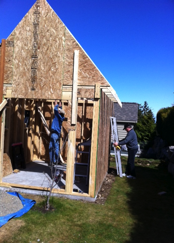 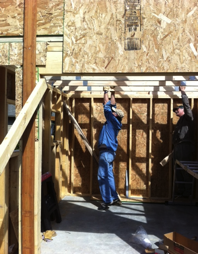 At the first sign of SPRING, everyone has projects that they’re dying to get underway.  My Ryan needed/wanted/ pined for… a garden shed.  He had worked diligently over the winter months perfecting the design of his coveted SHED, by dusting off his Auto-Cad skills and then ultimately hired a professional, after all, to adjust the plan to comply with district building regulations. (Let’s just say after plans were created for the ideal SHED, reality hit! Apparently there are district size restrictions and the SHED became far less grandiose in size!)  Seriously, I think the man had secretly been planning a “MAN CAVE” complete with lazy boys, beer fridge and a flat screen TV.  Nope, that wasn’t going to happen in the shrunken version that he was forced to build!

Now my Ryan is one of those guys who must be a “do-it-yourselfer”.  So the minute there was an opportunity (without rain for a day and a temp. above 0 degrees); the cement pad was laid.  At this point, our neighbors became involved.  They would wander by and politely inquire about the beginnings of an obvious project. (Very difficult NOT to notice the hubbub of activity in laying concrete and the load of piled up lumber blemishing our not so pristine yard!)  And Ryan, being a man who believes everyone will want to know the intricate details of his plans, elaborated on his scheme to anyone who innocently (and kindly) queried and listened.

Where is this leading, you may ask yourself?  Well Mary and Ryan learned the true sense of community this past weekend when four of those polite inquirers were called upon to help put up the trusses for the very steep roof of the SHED.  These incredible individuals agreed to come and help (taking pity on Mary who they knew was NEVER going to be have the muscle power to assist). Well, let’s just say what actually was only supposed to take a couple of hours to complete, ended up a full day of labor as they continued to put the roof and sides on the frame of the SHED. Of course, the project ended up with 5 pros who gave up the first true day of sunshine in Nanoose Bay to make Ryan’s dream SHED a reality.  By evening, Ryan had his SHED!  Of course we proudly emailed pictures of the “beauty” to everyone we thought would be interested.  The only replies we received were comments about the size: “It’s so BIG! Why did you make a 2 story SHED?”

We don’t care.  Ryan thinks it’s a “work of art” and he’s already moving tools into his SHED! Our lovely neighbors will be invited for a “SHED Christening Barbecue” to celebrate their remarkable achievement to “RAISE A SHED”! 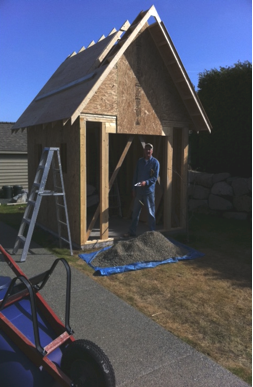