I know… I know…. it isn’t Tender Tuesday-it’s Marathon Monday.  That’s the point, I had to write my Tuesday post today…

I want to share how easily it is for me to relate to Dave Alavoine’s cartoons, as well as being inspired. In the PACIFIC YACHTING MAGAZINE (JUNE 2016 edition of COCKPIT CONFESSIONS), his cartoon illustrated a submitted story, entitled, SHORT WHITE WATER. The minute I read it, I was compelled to write about one of our early sailing experiences going through a pass in the Gulf Islands. (I’d love to scan this published cartoon here for you, but don’t want to break copyright.Please look it up!)

Several years ago, when my husband and I had just started sailing a 27foot Catalina, we docked for the night at Maple Bay Marina on Vancouver Island. Rather than start preparing dinner, after a long day on the water, we chose to go up to the pub restaurant. While enjoying our meal, we met a personable couple that were also sailing to Silva Bay (on Gabriola Island) the next day. We hit it off with these novice sailors, who were just like us! They had just bought a 24foot sailboat for some new adventures. He was an engineer and she was a judge and they lived on an acreage on Vancouver Island with their horses. Both couples were excited about being on the  water and we had some fun (and scary) tales to share with one another that evening. As we left the restaurant that night, we agreed to hook up with one another the next day at our new destination.

I’m not sure what they did after dinner that night, but my cautious husband had his charts and tide tables out, figuring out precisely when we’d be going through the Gabriola Pass. Apparently, it’s important to time it right so that you go through during slack water, as the tide starts to change directions.   So we followed our plan, and motored doughnuts at the mouth of the pass, waiting for the exact time that it would be safe to proceed.  I decided to sit up front and watch how my capable husband would manoeuvre the ON EDGE (The naming of our first boat is another story…!) through the pass. Well, didn’t I get a surprise, as we went through the middle of those tidal whirlpools at 7 knots when all 110 pounds of me took on air? Yep, I could have flown right off the deck onto the rocks, but luckily had held onto a halyard, as we approached. Being somewhat inexperienced, once we passed through and hit calmer seas, we both felt simultaneously relieved and exhilarated that we’d made it to the other side unscathed … (Okay, I admit I had a bruised bottom!) We couldn’t wait to meet up with our newfound friends to swap stories!

When we finally arrived at dock in Silva Bay, we spotted our new acquaintances sitting on the back of their small sailboat, sipping wine. They waved and shouted us over. We were shocked to see them docked and settled in before us!  How had that happened? When we inquired how they had managed to arrive before us, when one had to wait to go through the pass in slack water;  our question sent them into convulsions of laughter! Replying between gasps, “We didn’t know about all that, so we just went through when we got there. We shut our eyes and held on when it started to look dangerous and didn’t open them up again until we were spit out on the other end!” OMG! They cracked up over our incredulous expressions- I mean, really, who reads charts and tide tables? DUH! Obviously not this intelligent, professional couple!

I’m sure you’ve been inspired by experiences or artists, as well! I’m posting a print of a painting that Dave gifted me with during a visit to his home and studio (Polaris Design). It is not a cartoon, but a historical painting of the R.C.M.P.’s “St.Roch” – the first West to East transit of the N.W. Passage. This just gives you an indication of the depth of Dave’s artistic abilities. Tell us about an artist that has inspired you to react to their work in some creative manner. (Leave your story in the Leave a Comment section below.)  I hope you’ll look up the cartoon in PACTIFIC YACHTING’S MAGAZINE (June, 2016) to see Dave’s cartoon and understand why it was such a great prompt (and inspiration) for my story. 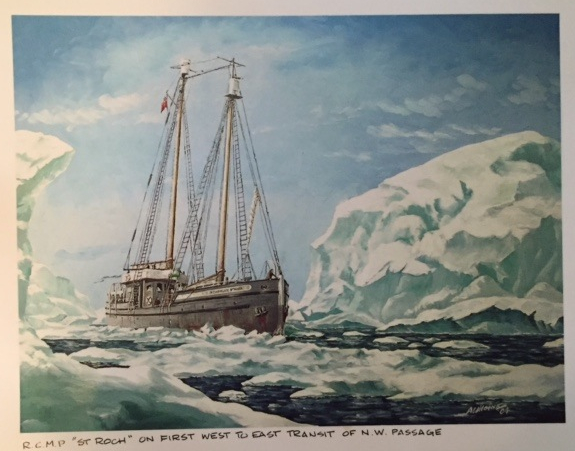