Our YACHT CLUB Wants PRAIRIE GIRL to Write Articles for their Website reporting on REGATTAS, SAIL PAST EVENTS, and COMMODORE BALLS! SERIOUSLY?

Imagine Prairie Girl’s reluctance when approached to create articles for their Yacht Club’s freshly updated website. That’s right… horror! If she thought she was getting away with fudging her ability as a sailor on spring cruises, it would quickly come out in the open- once she began writing articles about regattas! What did Prairie Girl know about racing? She had only participated in the CLUB REGATTAS and the JACK and JILL RACES organized to include those cruisers who NEVER race… not even for the less competitive Wednesday Night Fun Races. Now she was expected to review these events in articles for members to access and relive. She SPOTTED A DILEMMA immediately. Wouldn’t the serious racers become a little cranky reading her articles critiquing the socializing at the BBQ, the weekend weather and wind conditions, and the Awards Ceremony wrapping up these weekend Regattas?

How was Prairie Girl going to avoid this volunteer assignment? She held off being inducted to this Communications Officer position through several techniques. The first and foremost strategy was to never be available for these special yacht club events. After all, she could use the travel excuse. Luckily for her, husband was still employed and a trip to the US occurred monthly. And then there was her work-she was actually putting all her spare time into publishing and launching her book, WHO’S the CAPTAIN? -wasn’t she? And of course, don’t forget there were some fabulous, extended international cruises that inevitably coincided with Yacht Club events. BUT ALAS, she couldn’t avoid the inevitable forever, could she? Finally, she had to give in and agree to cover the 4 main events of the year: Sail Past, the Spring Lasqueti Regatta, the Fall Club Regatta, and the Commodore’s Ball.

She had to put a humorous spin on whatever she was covering. Obviously that had become her writing style for her blog and books, so one has to be true to oneself- don’t you think? Initially this probably didn’t make some of the yacht club executive members ecstatic, as a little fun was poked at them or the organizers. Some members felt that these reviews shouldn’t be quite so entertaining, but when they became desperate for help, they quickly realized that members were accessing the articles for a few chuckles and having some fun with one another. It appears that the website is becoming more popular amongst our techie yacht club members.

Prairie Girl thought you might enjoy a teensy peak into finding the humor in these Yacht Club events. Its important to acknowledge that the members are fortunate to have such an inclusive, friendly club that strives to provide the most amazing events for its members and visitors. That is Prairie Girl’s KEY MESSAGE. These little tidbits and pictures are  pulled from the articles themselves.

Commodore P welcomed everyone to the event. It was clear he was thrilled to see the crowd of participants filling the After Deck and adjoining pier. Commander J followed with sharing a helpful aid for Commodore P to access when heading out to position his stationary vessel. (Yes, he wore the PORT (red sock for left) and the STARBOARD (green sock for right!) certainly, a must for any Captain (and perhaps especially Commodore P…). 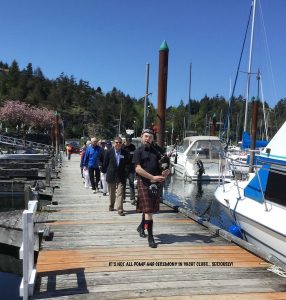 Fairwinds surpassed everyone’s expectations with their delicious buffet dinner. No one left the table hungry… and many just had to have a second helping of those scalloped potatoes… And you probably noticed how quickly the sticky pudding disappeared! Did anyone else observe a certain Commodore’s wife sneaking a second helping of this all-time favourite dessert? 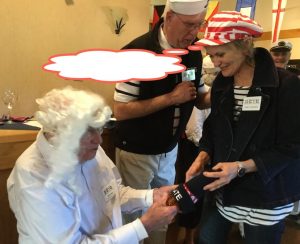 Prairie Girl can dress nautical… but can she sail?

Saturday’s weather held everything that our sailors could ask for. There was plenty of sunshine (Just ask P about her sunburned nose!), and strong winds most of the day. Everyone made it back before dark, although some were caught practising knot tying for a few hours at the top of Lasqueti when the winds disappeared… The competitors had a great night, reliving (and perhaps, embellishing?) their experiences on the water over a steaming bowl of chilli. Well, maybe there were a few libations poured to keep the stories going… 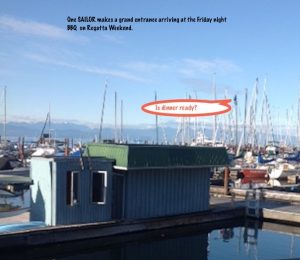 The Regatta came to a close and everyone seemed reluctant to have the weekend end. The mood was one of happy exhaustion after hosting such a successful weekend.

And now you’ve suffered through reading this account written by a cruiser- a woman who knows absolutely nothing about racing! Could you tell?

– Mary Laudien (The woman taking notes at the Awards Ceremony!) 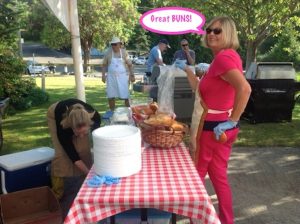 Congratulations to all the fine sailors that participated from near and far to make this event the traditional success that everyone arrives expecting. Our Regatta guests took the time to express their appreciation for being hosted during the entire weekend in such a welcoming and exceptional way. The 30th Anniversary of the SCYC Inter-Club Regatta proved to be yet another special memory… in spite of those fluky winds!

(And perhaps a Team Spirit Award should have been suggested, as well.  After all, Surfrider did have matching jackets, caps, and painted toenails! The ultimate in a color coordinated crew!) 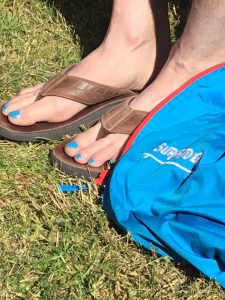 …And then it was on to more serious matters… THE DREADED MEMA AWARD! (Most Embarrassing Moment Award for those newer members who probably haven’t had the pleasure of being nominated yet…) Some honorable mentions of a couple of ROCK HOUNDS were put forth: A S and R L (yes, my Captain) both found a rock at low tide in Marks Bay, T R towed his dingy along for a race… and M S spent the entire sailing season sorting out an alternator shaft! The floor was opened up for real nominations. Apparently D D fell asleep on a winch while sailing… P M forgot to disconnect his electrical cord from the dock before moving forward out of his slip. He thought he put it in neutral as he jumped onto the dock to pull the plug, when his phone rang. Good thing a FRIEND was close by and realized the cord was stretching with the boat headed towards the break water…hmmmm…. and then G D presented a poem about some member oiling and greasing his windlass too efficiently and finding his anchor and chain on the ocean floor… J V the MEMA Award recipient of 2016! Thank you Judge B for your unbiased judgement call and J S (last year’s recipient) for presenting this distinguished award!

The finishing touch to this perfect gala, were the pictures posted around the room of previous COMMODORE BALLS, with encouragement to take your own photos home with you. Well, I guess it was gratifying for those who never seem to age. Some of us with noticeably more wrinkles and less hair… not so much!

The honest truth about this volunteer writing gig is that Prairie Girl is learning so much more about yacht clubs, racing, creating and publishing on websites, and the amazing teams of volunteers that come together to make belonging to this Yacht Club a privilege. It is a joy to socialize, cruise, race, dance, participate in ceremonies, and further enjoy the Pacific Northwest with our incredible yacht club friends.

If you belong to a Yacht Club, let Prairie Girl know what role you play in the club and some of the positive experiences you’ve had that make you proud to be a member. Please add your comments below.