PRAIRIE GIRL AND HUSBAND SAVE A SEAL PUP

Anchoring out on the serene waters of Winter Cove in July, left Prairie Girl and husband with a completely unique and endearing experience. This post is not one of Prairie Girl’s usual humorous tales… this one actually is a perfect TENDER TUESDAY post.

It all started early morning, after a peaceful nights sleep on the hook. A thumping against the hull awoke Prairie Girl, but she never thought much about it. It wasn’t until they went out to the cockpit to have their morning coffee in the blissful sunshine that they discovered a baby seal pup, sniffing and trying to suckle the bottom of their dinghy. This little seal just never stopped swimming frantically up, down and around the TwoCan and the OneCan (the dinghy). He would approach the ladder and whimper. Prairie Girl and husband were sick for the little pup who appeared to be adopting them as his mother. 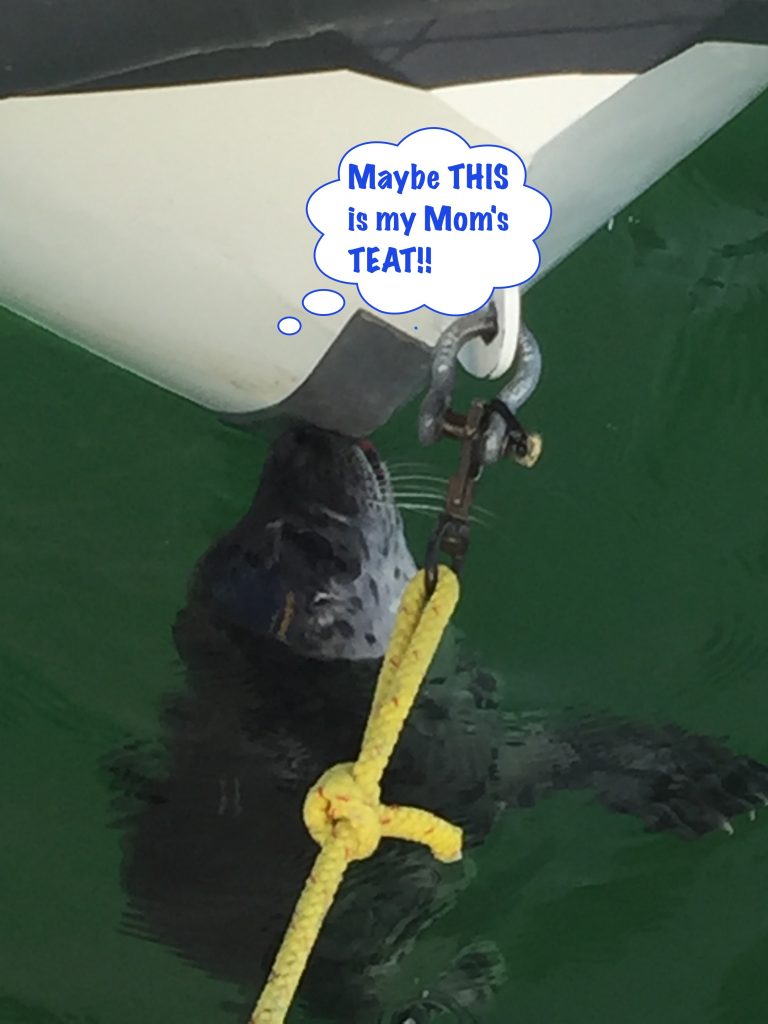 Husband thought maybe if he took the OneCan out to check the crab trap, that perhaps their little orphan would follow and stay with the adult seals sunning themselves on the rocks nearby. Well, he did follow husband out to the trap, but he didn’t stay with the seals, and soon after husband returned to the TwoCan, their little orphan seal was back to his tormented suckling of the dinghy and boat. 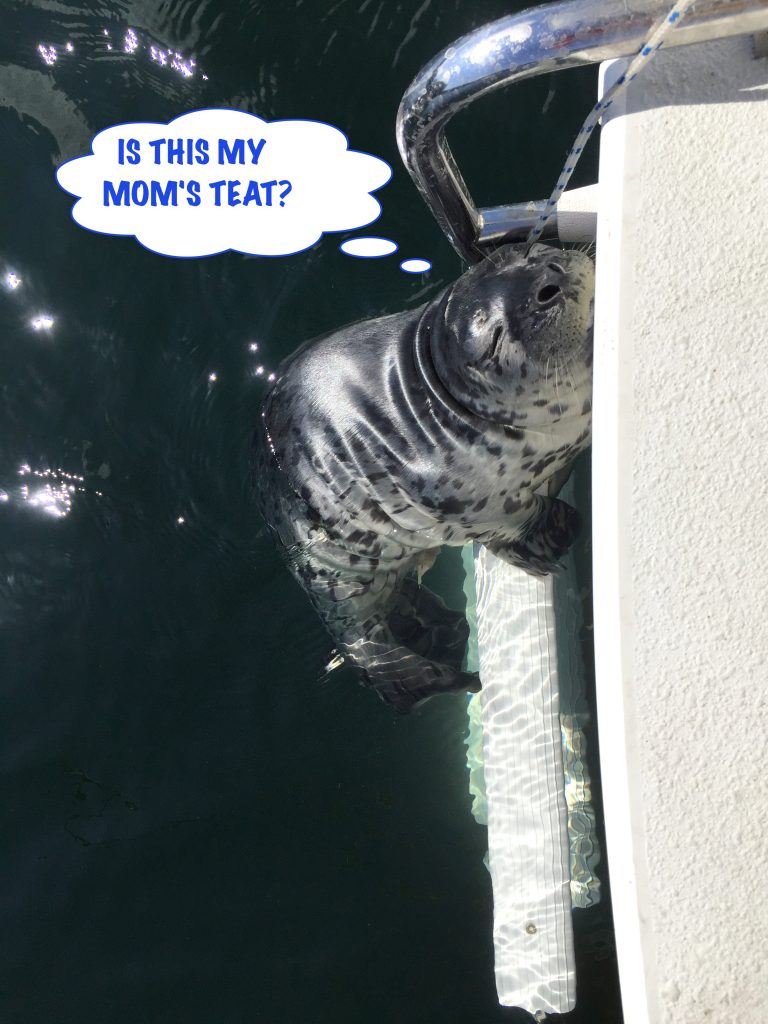 Prairie Girl and husband, by this time, had surmised that either his mother was killed while foraging for food or she had abandoned him. He was sticking to the TwoCan like glue, perhaps because this was where he was last with his mother. It was becoming obvious that they were his lifeline. They just had no idea what to do about it. 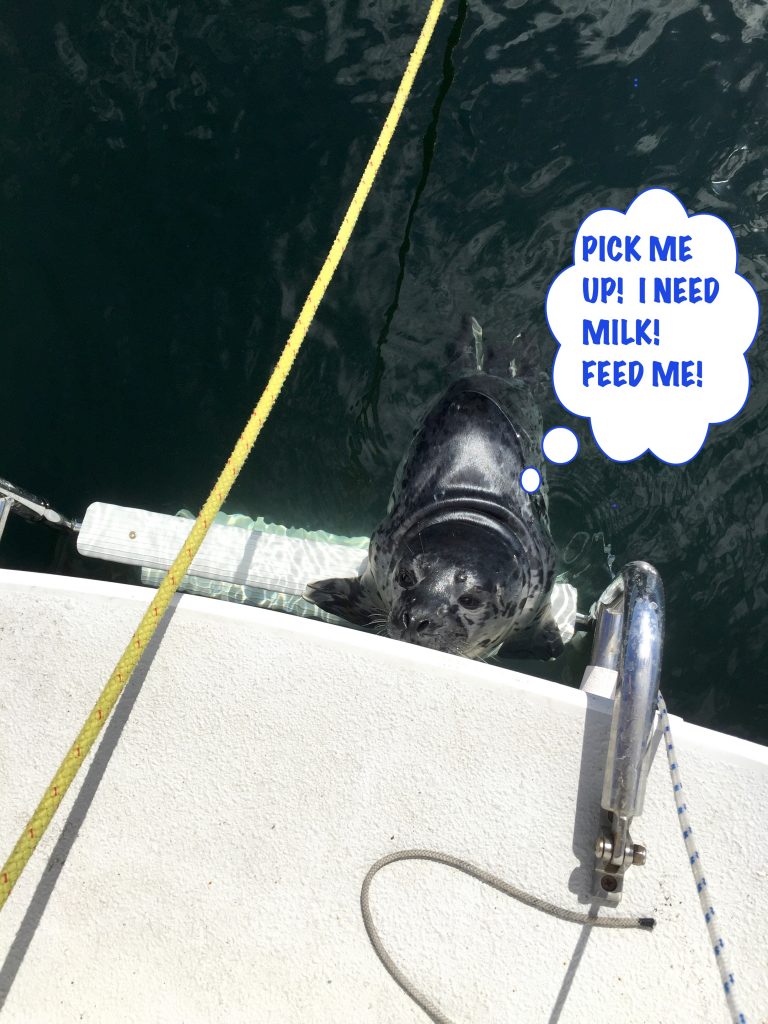 Of course, one never anchors alone and plans had been laid the night before to trek from Winter Cove to Lyle Harbour (Saturna Island’s ferry terminal) and enjoy a seafood pub lunch. They assured themselves that by the time they returned, their seal pup would move on and perhaps, reunite with his mother…. 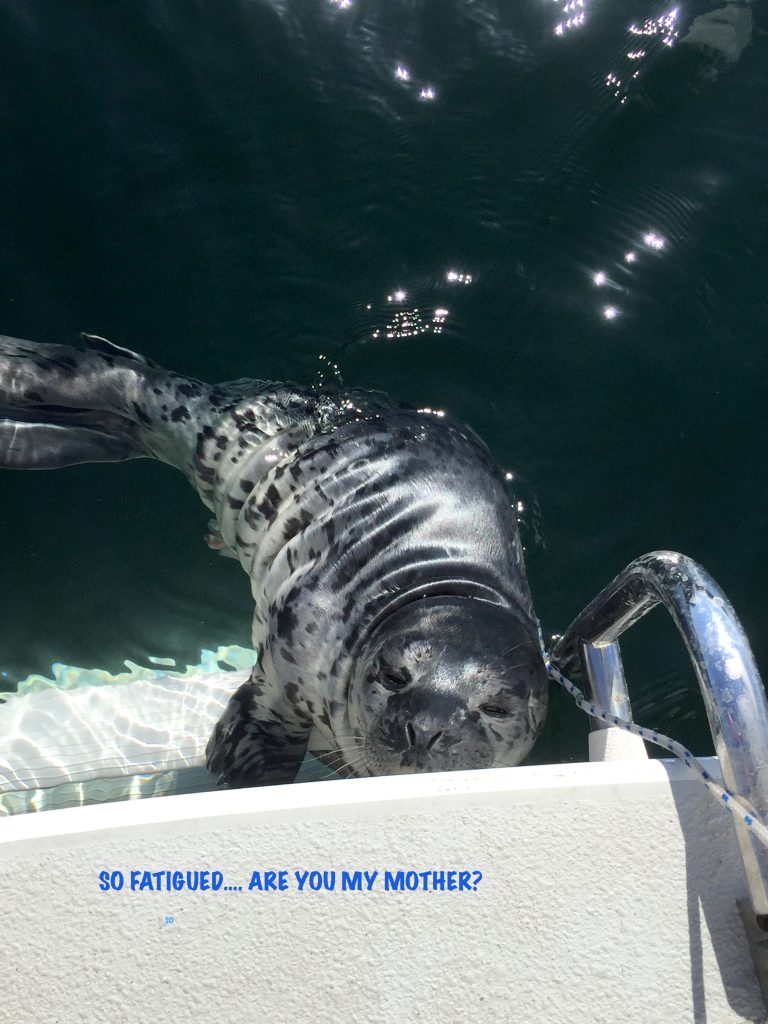 Wrong! Three hours later, as they approached the TwoCan, the frantic baby seal was waiting for them. He was hanging from their ladder and trying to scale it onto the boat. By this point, Prairie Girl and husband were at a complete loss as to what to do. It was obvious that he was in trouble – fatigued, hungry and hypothermic. Husband hailed a boat full of local fisherman to ask if they could offer any suggestions for how to help their little seal pup. The men had no idea what could be done, but asked if they’d searched on line for some sort of Rescue Association… DUH! Why hadn’t they thought of that?

Husband quickly found a website (ISLAND WILDLIFE RESCUE) with an email contact (iwncc@aol.com) and a contact phone number (250 537 0777). He explained the situation they had and their concerns for the welfare of this little abandoned seal pup. The vet asked about his behavior and requested a picture. Two minutes later, husband received a call that a rescue boat would be deployed from Saltspring Island and arrive within the hour.

In fact, the boat made excellent time and was rafted up to the TwoCan within 50 minutes.   The rescuer quietly approached the baby seal hanging off the ladder of their boat and scooped him up with his net. When he held him up on his boat, Prairie Girl and husband were astonished to see the umbilical cord still attached. The pup was wrapped in a towel and placed into a plastic dog kennel for immediate transport to the vet for attention. It all happened so quickly and efficiently, that within 5 minutes of the boats arrival, their seal pup was already on his way to meet Marielle, the vet who was waiting for him. Prairie Girl and husband were overcome with feelings of loneliness and loss, the minute the boat disappeared out of the cove. (After all, he had adopted them as his parent, hadn’t he?) 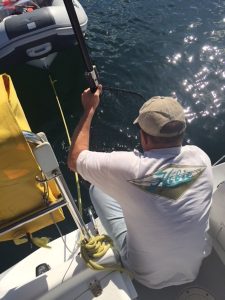 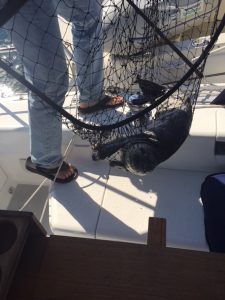 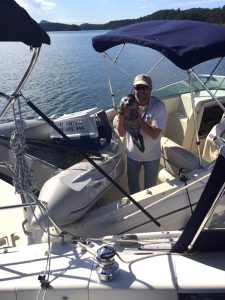 About an hour and a half later, husband’s iPhone rang (or quacked.- to be concise). It was the vet- Marielle, who had assessed the need for a rescue, in the first place. She called to say that she thought he was only four days old and he was about 5 pounds underweight. He was becoming hypothermic but she felt he would make it. They planned to transfer him to the Vancouver Aquarium and nurse him back to health. She acknowledged they had saved the seal pup by calling in and were given an opportunity to name him after an ice cream flavor. They chose Cappuccino and now he has a name when they remember the special day spent with the seal pup who had adopted them.

Prairie Girl just had to tell her readers the story, as something like this could happen to you out on your boats or walking a beach. Please keep the phone number handy, and don’t wait too long to call. The rescuer said that seal newborns are often abandoned by their mothers because they were too young, when bred, and they don’t know how to care for them. This little pup was in distress and Prairie Girl and husband felt useless not knowing what to do to help him. Now they know and you will, too!