If you’ve read the first two books of my Frenchie series, you’ll know that Ethan ( the 13 year old main character) gets into some crazy and hilarious predicaments in his quest to become a Frenchie dog owner. The inspiration for the first novel in the series came from dog sitting my Frenchie grand-dogs and trying to convince my son to write a blog about his misadventures as a dog groomer. This didn’t happen, so my imagination took over and the story evolved as Ethan plotted with his quirky, conniving Grandma to  gain ownership of a Frenchie without his overworked, single mom suspecting a thing. He entertains his friends and Frenchie followers on his nightly blog, “Frenchie’s Best Friend.”

My sons’  Frenchies- Bert and Cecile were named after their grandparents. (I still find that just  a little weird!)  They are both adorable with their unique personalities and behaviours.  Bert is a macho Bulldog with attitude who simply expects to be fawned over and loved.  Cecile, on the other hand, doesn’t quite get that she’s actually a dog.  She seeks cuddling and attention through her cute little girlish antics.  No one can be around either puppy and resist them!

This week of dog sitting Cecile has been as entertaining, as usual. She gives me all kinds of new scenarios to think about and work into my novels. Like the raincoat situation, for instance. Its been of week of constant rain and fog. Cecile takes one look at the raincoat coming out and lays down.  When I coax her to come and get her raincoat and bra harness on, she slinks forward, ever so slowly, on her tummy with her head down. We finally make it out the door and she puts the brakes on.  That’s right, she isn’t going to get her toes wet in the rain, even with a slicker on!

And then there are her acrobatic moves.  Who would ever imagine the pint-sized runt of the litter could jump over stair gates?   That’s right, she just bounces over any kind of barrier.  Her latest feat was jumping onto the back of a leather armchair (in close proximity of the dining table) and leaping across to the table top to see what was on my computer screen.  Yes, she is  curious!

As I spent my week up on the mountain in Port Moody dog sitting, my third novel in the series started to take shape. Think in terms of canine stars and you might have a hint of where this is going. Chapter Eight was written today. I’d say the week was worthwhile and, once again, these Frenchie grand-dogs are providing the inspiration.

If you haven’t had a chance to read Frenchie’s Best Friend -Follow the Blog or Frenchie X2 -Follow the Blog in eBook or paperback format, go to my website at www.twocandobooks.com for links.   It’s a great family read for people who love their pets and enjoy humor! 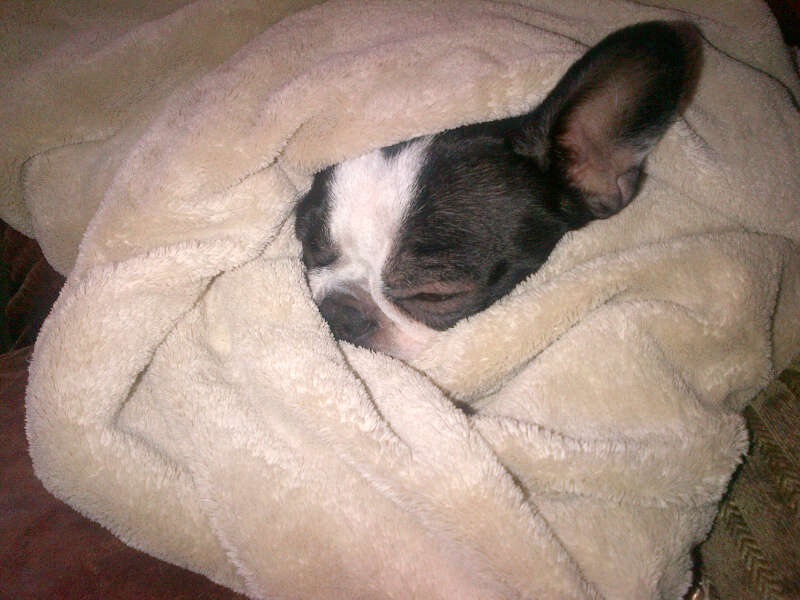