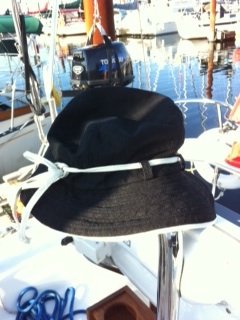 Sailing along the Pacific Coast, means donning a Scala hat, especially at the age where brown spots magically appear daily. Wearing a broad brimmed hat on the water is mandatory, regardless of its lack of a fashionista appeal. Movies and TV ads never show the woman aboard a sailboat in an ugly hat or flattened hat hair.  Oh no, they look gorgeous, nautical, tanned and relaxed.  Reality, the Scala hat can’t just be any cap, no, it has to be full-on with a wide brim for maximum sun protection.

It’s bad enough you have to wear the thing, but it’s never discussed how trying it is to keep the ugly hat on one’s head out in the wailing winds.  No matter how tightly the tie is cinched, there’s no guarantee the Scala will stay protectively on one’s head.

Yesterday, as I emerged from the protected area of the dodger to take over the wheel, my Scala lifted off into the ocean.  Can you visualize the  difficulty in seeing the black Scala amongst the waves and swells?  Husband Ryan immediately went into his MAN OVERBOARD drill.  (We won’t be spending another $40. on a Scala replacement, now will we?)  Oh no, the hook was thrown into my awkward hands while the Captain grabbed back possession of the wheel. Could I even see the errant hat amongst the waves?  Not a chance.  But the mighty captain spied it and sailed past the soppy floater, as I frantically tried positioning myself to hook it on.  Of course, I, the awkward and uncoordinated, missed the hat completely as it floated on past us. “Perseverance” is the Captain’s second name, and the boat was maneuvered around as “eagle eye”, once more, spotted the escaping Scala and pointed emphatically at it.  With sunshine glaring in my eyes, I actually spotted it just in time and ventured to re-position the hook without getting tangled in the shrouds.  Missing the brim, I stabbed desperately at the cinched tie and incredibly I had it. Lifting it frantically out of the waves; it dropped off the useless hook.  Intent on nabbing the precious Scala, I leaned over the life lines, lunging breathlessly at it in one quick motion, losing my balance.  How I retrieved the precious Scala and kept my body from going over the lines into the water, is unbeknownst to both the Captain and I. But I had the sloppy, disgusting hat on the end of the nasty hook to prove it  and I felt proud!

My Scala survived, rinsed and ready for the next sail.  Husband Ryan is content; he saved the $40. replacement charge and congratulates himself on yet another successful MAN OVERBOARD drill.  My thoughts?  “Better the hat than the woman overboard.”