I don’t know how your family celebrated Canadian Thanksgiving, but I’m almost certain it didn’t resemble the one I experienced this year.

Most of us conjure up a vision of an elegant, cozy, homey dinner of stuffed turkey and homemade pumpkin pie. The table set with autumn decor, a crackling fire adding ambience to the delicious, mingling aromas.

Of course nobody considers the harried cook in the over-heated kitchen frantically mashing potatoes, carving turkey, stirring gravy, and trying to have all the feast fixings laid out on the dining room table before it cools and congeals. Thanksgiving dinner pressure – that’s the real picture.

Well, wipe that image from your mind and conjure up, instead, a family of three couples: parents (in their early nineties), their son and daughter (in their mid-sixties), and their spouses (aged 60 and 80). A typical family gathering of parents and their kids, right? And where did they have their Thanksgiving feast? Well, don’t you know- Milano’s PIZZA, of course! Not a whiff of roasted turkey to be found, but certainly aromatic garlic wafting through the cavernous restaurant.

And didn’t the daughter of the family conveniently dream the night before our Thanksgiving gathering that she, her mother, and her sister-in-law won BIG at the casino? It was a premonition that obviously must be acted upon. There was no stopping “the girls” from heading down to the Casino directly from the pizza table, deserting the guys with instructions to return home and prepare the coffee and COSTCO pumpkin pie!

All three gamblers had their $20. limit clutched tightly in their fists, posed to feed the nickel machine… Yep, I did say nickel- not dollar machine. Why, you ask? Apparently, there is more play time on a nickel machine. The three “girls” clustered in front of the machine of choice, anticipating the big win as the $60. deposit disappeared within the bowels of the starving machine. As the final nickel was played, there was an audible sound of disappointment. It was over, all three of us incredulous that somehow the “dream omen” had not played out!

The 90 year old decided she wasn’t ready to be wheeled back to the car without her winnings! She enticed her daughter to put an extra $10. into the machine of her choice (a winning machine as opposed to the greedy machine that had already eaten up our combined $60.), and she continued to play. So the “girls” stood behind their mother’s wheelchair hanging on each hit of the button as the $10. quickly started to disappear. On the second last hit, and with all three of us sighing in resignation that someone had had a faulty dream, eight BONUSES lit up on the screen and the top of the machine sounded as a sum of $1544 was highlighted! That’s right, a BIG, BIG WIN!

And wow; we felt so thankful when we walked into the apartment for our pie and coffee- tightly clutching our loot!

OH HAPPY, HAPPY THANKSGIVING! Our unconventional Thanksgiving proved to be tons of fun! 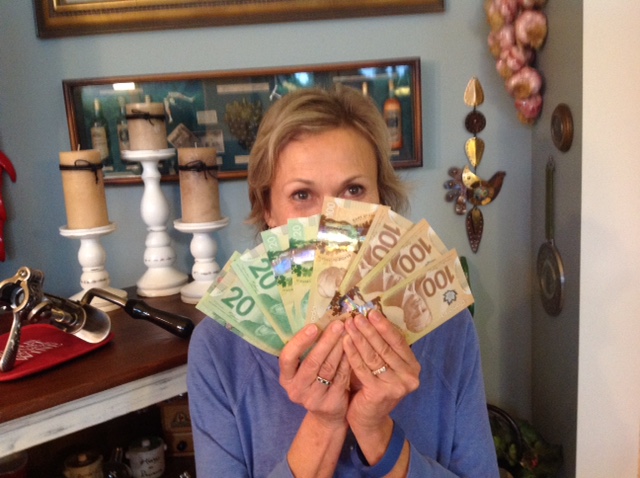 I’d love to hear about your Thanksgiving.  This was such an unusual celebration, and I’m not sure entirely in keeping with the theme of thankfulness, but it certainly was fun!  Why don’t you leave me a comment to let me know your thoughts?