Hiking the Phoenix desert mountain peaks is a fascinating study in human behavior. One’s approach and compulsion can differ drastically from person-to-person- let alone from couple-to-couple.

Take my husband and I, for example. Upon arriving in the desert, we were automatically at different fitness levels. I had been power walking the rocky hills of Nanoose Bay daily for a few months prior to our arrival. He, who still works from home in front of a computer, had gone on the occasional stroll…

I am primed to get up at whatever hour it takes to get a hike in (surely 7:30 is a reasonable time to rise when one is on holiday), while he must be up before dawn, sipping coffee, downloading the newspaper, and getting his system in order, before donning his hiking boots and setting out.

The first week, consisted of long sidewalk hikes around our Ahwautukee vacation neighbourhood, even though hiking trails abounded in all directions (slopes right off our patio doors). Of course, these were sidewalk marathons early- very early in the morning before the heat of the day came on.

When we finally graduated to hiking trails, this became more interesting. Never once did he consider carrying bottled water along, but his trusty camera was always within his grasp (meaning: constant photo shooting breaks in our hiking rhythm). We took the lower trails for the next week and all was well, as we dodged the mountain bikers who use them as their speedway. Contrary to the posted park signs enforcing that,“BICYCLISTS SHOULD YIELD TO ALL OTHER USERS“. (It’s completely possible that the bicyclists in Phoenix are illiterate!) We explored various local trails and celebrated our return to the dusty and unique desert flora and fauna. 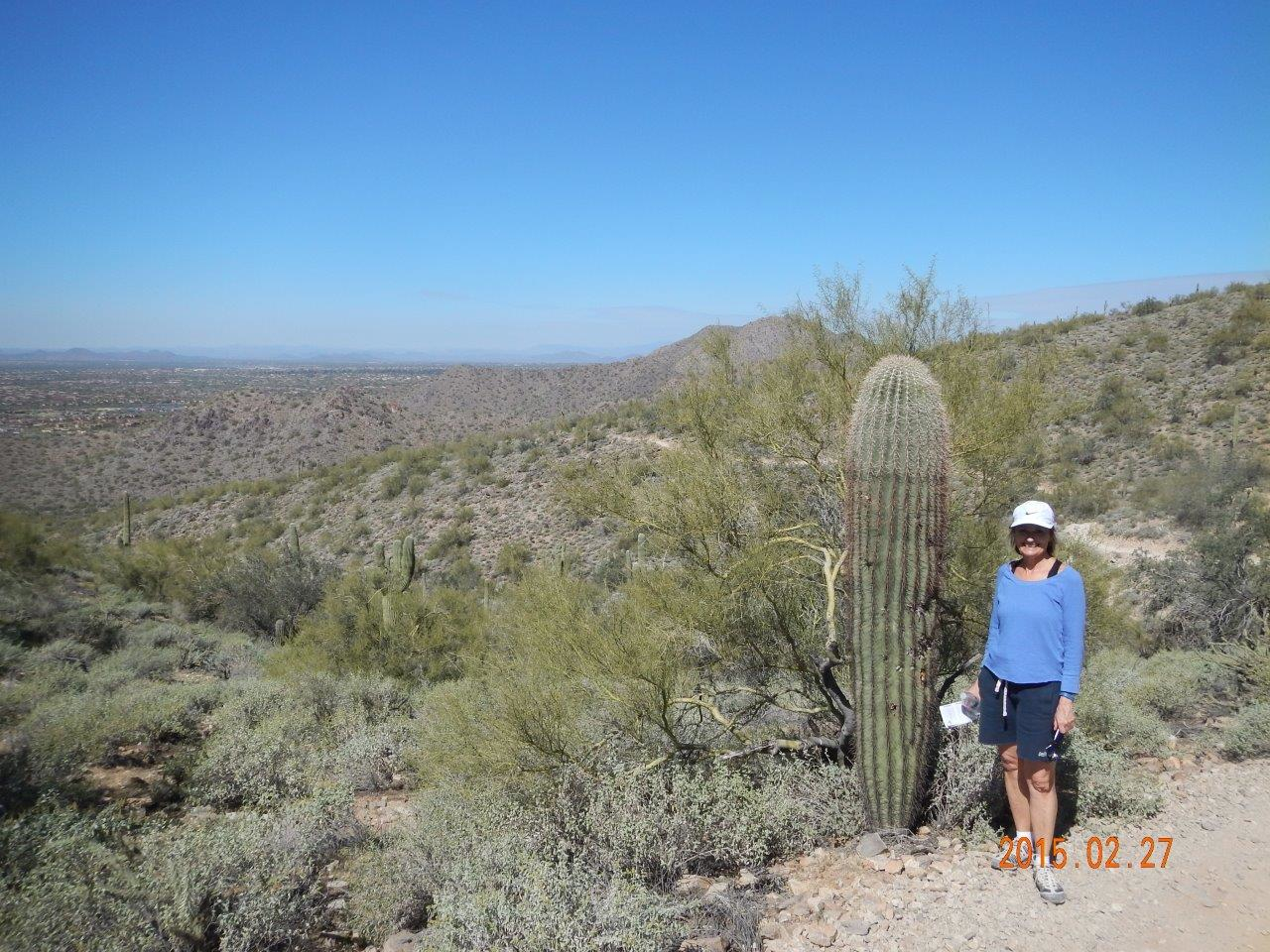 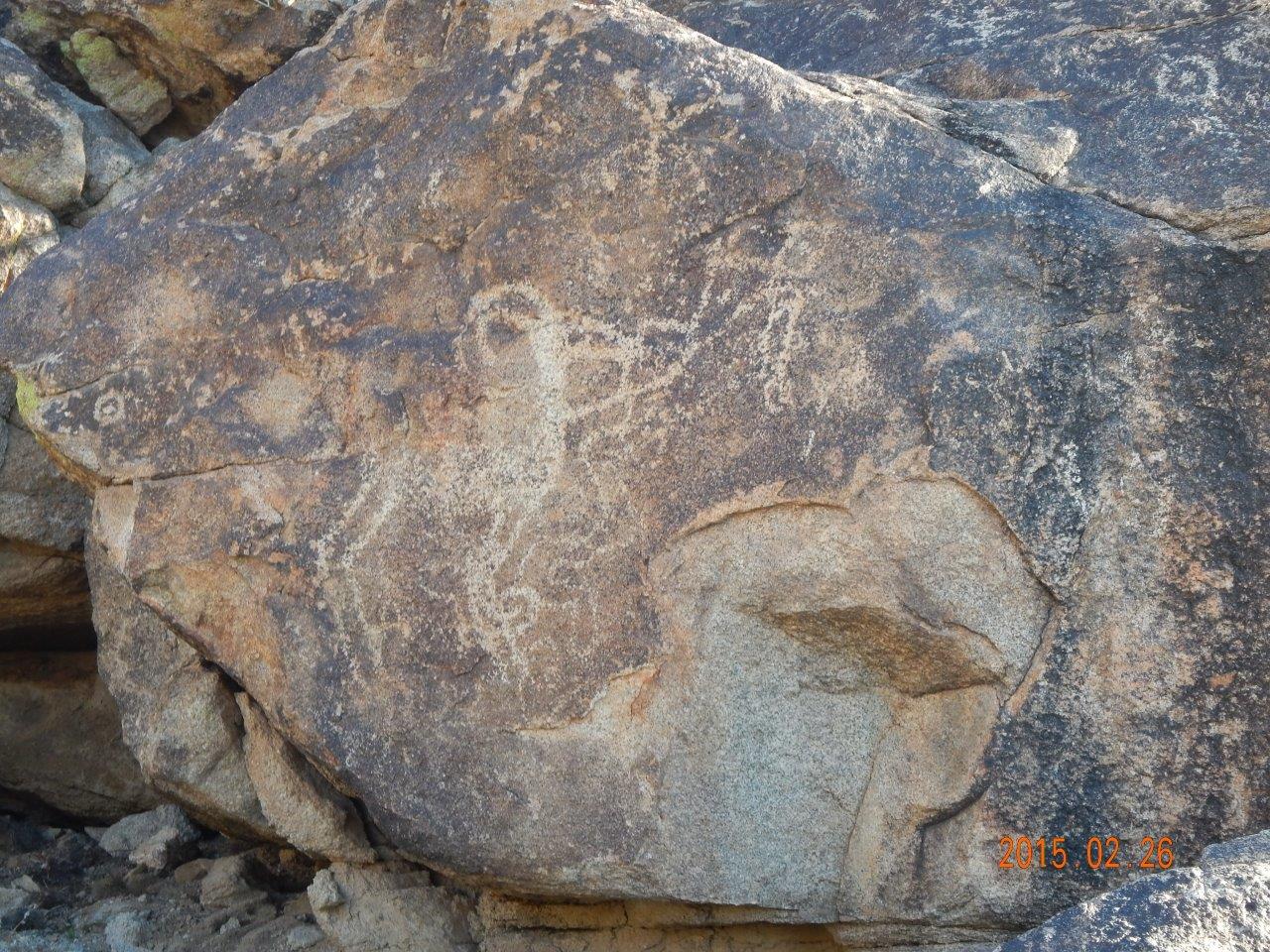 Pictographs on rocks at Telegraph Pass

By the third week, we were into the hikes with elevation. In other words, we were heading up the sides of desert mountains or looping around them. The sights from these mountain peaks are expansive, and such a bonus after one has grunted and plodded their way to the top in the blazing heat. However, as with all things worthwhile, there can be a downside. What does one do when setting out on a two hour hike and becomes desperate for a washroom after the first half hour? You understand the dilemma, right? Yes, there are usually HONEY BUCKETS found in the parking lots of these trails, but they don’t do one much good when you’re up on the top of a mountain peak and the trails are buzzing with hikers… OMG! (Even if you were tempted to “do your thing” in the bushes… there isn’t enough vegetation up there to hide your sorry butt from curious onlookers! So you do what you have to … you tear down the mountain slope at top neck speed – oblivious of the slope etiquette of DOWNHILL TRAFFIC YIELDING TO UPHILL TRAFFIC. Of course you do! And inevitably when you run across the parking lot towards that precious HONEY BUCKET- a bicyclist speeds by you and settles in for a timely visit! DESPERATION! 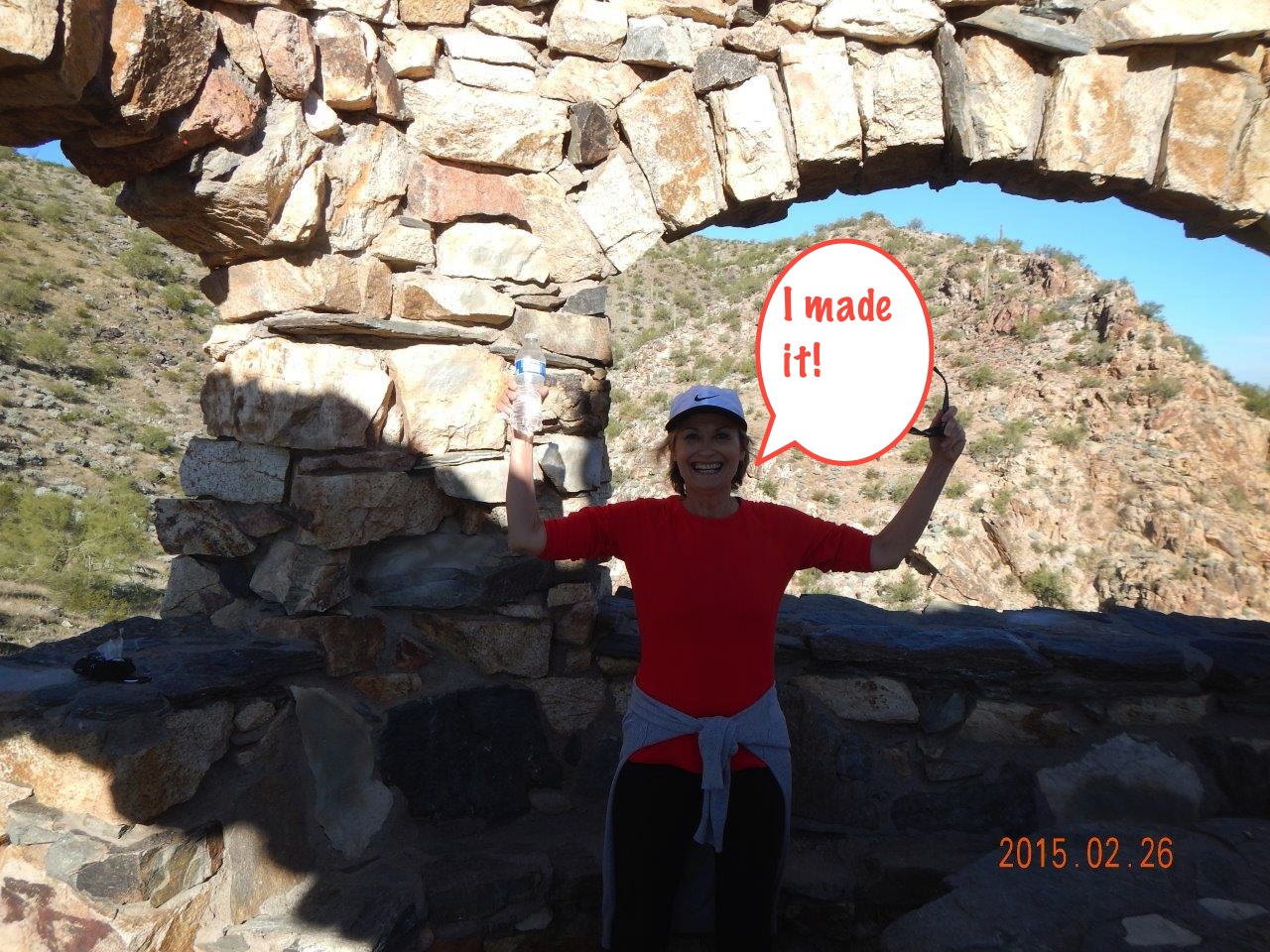 Once you begin daily desert hikes, the habits of other hikers become a source of interest and amusement. First of all, the hiking clothes and footwear choices worn on the desert terrain proves intriguing. Some women actually wear everyday flip- flops on these jagged, rocky trails! One woman, in particular, was dressed in rather tight, revealing clothing, indicating someone trolling the trails (not hiking)! Or imagine climbing uphill in 80degree weather with a cardio-workout in full swing, and being passed by someone donning a hoodie and sweatpants! It’s inconceivable that anyone can stand black, fleece clothing on a desert hike … and yet… Now visualize the array of headgear or lack thereof! It ranges from pirate-type kerchiefs –  to full-on felt cowboy hats – to completely bare, sunburned, bald heads. Evidently, not everyone experiences the same discomforts in the desert sun!

There are all varieties of dogs on these hikes. This can cause a bit of distress for someone descending on a narrow ledge and they have to brush past a Rottweiler. And, what about having to pass the woman (wearing a tee-shirt that matches the purple of her cock-a-poo’s leash) who has stopped in the middle of the path to let her darling do its doo-doo? (My poor husband couldn’t stop gagging as he attempted to push past.) 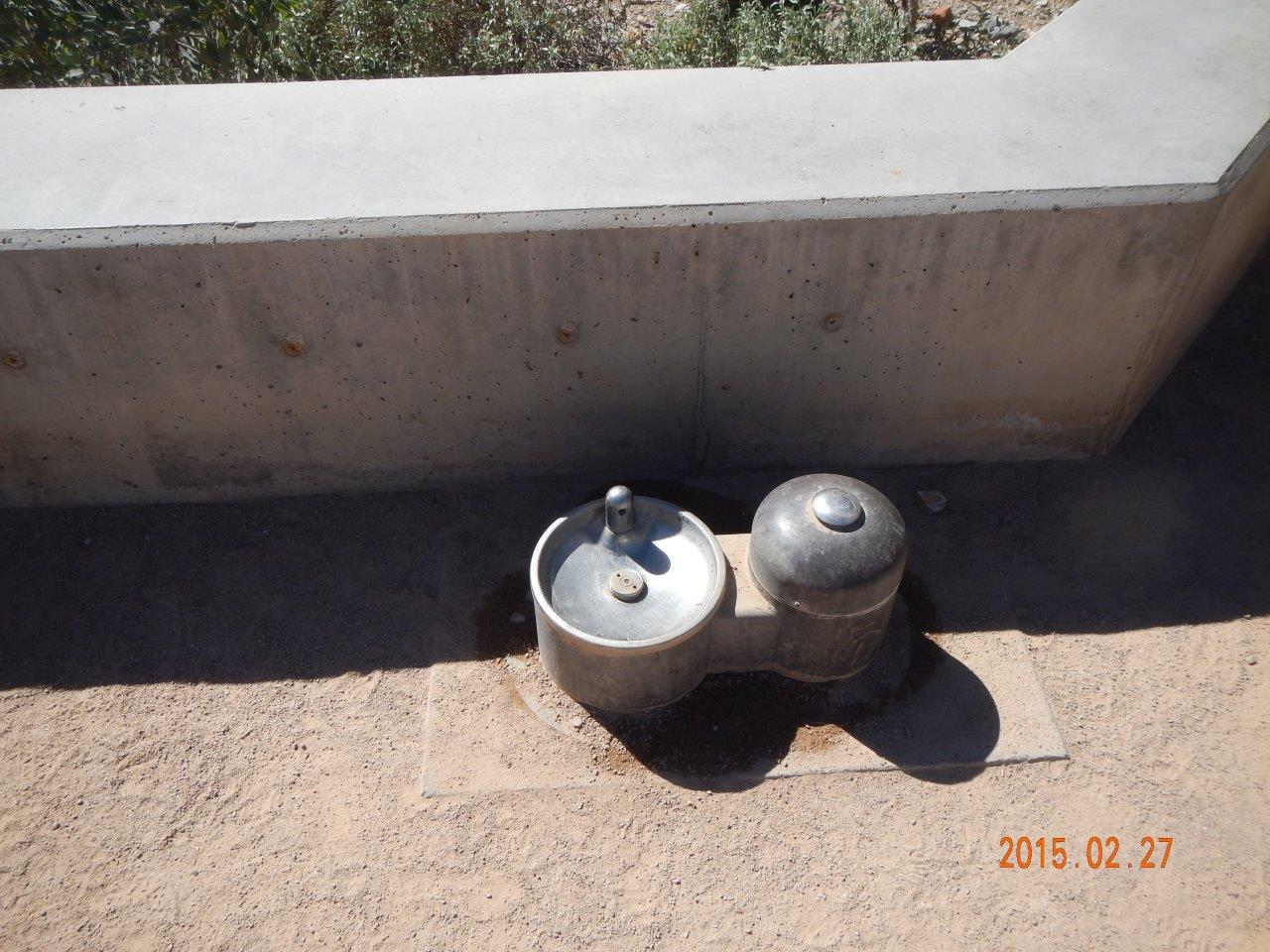 And you know how one always pictures hikers with their trusty backpacks filled with emergency bandages, water, cell phones, etc.? Well, forget it! No one carries backpacks except the nerdy tourists. Everyone is listening to their play lists through miniature headphones and most carry disposable water bottles, that hopefully end up in the recycling bin in the parking lot and NOT shimmering on the desert floor amongst the cacti!

We know of a couple that fly down to Phoenix often from the prairies. They try to do a hike every day. They’re both in excellent shape, however, one of them is perhaps more motivated than the other. Let’s just say, the one who is becoming weight conscious has gone digital and his app records every step he takes in a day and how many calories he has burned from the exertion of his efforts. His wife who is wafer thin, just quietly maneuvers him onto the trails each day and nods approval to his ongoing banter of step calculations, as he cracks open yet another beer…

Another couple spend every winter in the Phoenix area and this Feb. they decided to start desert hiking. One must have a little background information to fully appreciate this decision. The wife of this dynamic duo is a physical fanatic- walking, biking, exercising, zumba dancing, etc. throughout her days…. let’s say, a slim, fit, mid-60’s, active woman. In contrast, the husband is somewhat rotund and husky. His daily passion is food preparation and the satisfaction of enjoying good food. A recent knee operation has been a significant issue to his fitness level, as well. Regardless of the discrepancy of active lifestyles, this couple chose to employ the aid of walking sticks (for her) and a walking cane (for him) to start their desert hiking careers.

All went well for the first week, as they kept to the lower trails, but human nature is such that walking the same trail over again isn’t quite as stimulating as the first time, so up they went. The climbing actually went quite well without incident. That is…until it was time to descend. Now, anyone who has done some desert hikes, knows that coming down off the peak is the trickiest part. Of course, Miss Fit was speedily descending when she heard his call for HELP from above! Her husband was on a ledge, trying to bum shuffle down the narrow incline studded with boulders and sharp edged rocks. That wasn’t working so well and he was struggling to gain an upright position, while simultaneously blocking the trail for oncoming trail users. His wife, fairly small in stature, knew she wasn’t going to be able to get him prone on her own. By this time, she considered abandoning him in his plight (or at least HE thought that was what she was contemplating), when actually she started to accost ascending hikers for their assistance. Eventually, these seasoned hikers helped him lower himself down the side to the lower level of the trail, but not before his wallet was snagged out of his back pocket. Thankfully, once the EAGLE HAD LANDED, he realized his wallet was dangling from a bush several feet above his head. Once again, the aid of some innocent, seasoned hiker was summoned and the wallet was retrieved and carried down to Mr. Hiker. Apparently the bickering of these two novice desert hikers was heard all the way to the parking lot, as everyone knows how sound travels across the desert!

( My personal take is that I’m going to be glued to the local TV newscasts, expecting to see our friend/relative being airlifted off their next targeted peak. Say it won’t be so!

I know many of you have had some interesting desert hikes yourselves. Please share in the comment section below. Let me know if you can relate to the stories and had a few laughs. As well, if you enjoy a few chuckles from the Desert Hiking Chronicles, please feel free to forward the link on to your friends and family. http://www.twocandobooks.wordpress.com