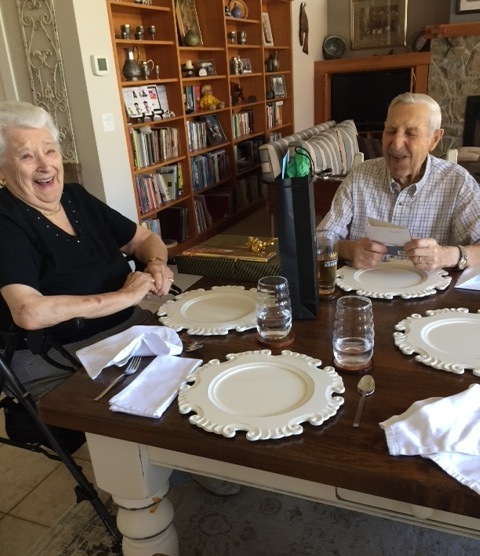 Thank you for following Tender Tuesdays, as one reflects upon the next stage of our father’s journey through the medical system and the effects upon his wife and his senior citizen care-giving kids. Thankfully, there were many tender moments along the way…

The kids had their hands full leading up to the decision to place Dad in Palliative Care. As the days progressed, Dad required more and more nursing care. He was sleeping the majority of his days away, and required assistance to get to the washroom throughout the day. The Government’s Home Care Program was arranged to arrive during the day to help with this, but at the best, on the odd day they’d actually show up, it would be the wrong time. (In other words, just after the private nurses had provided a bathroom visit and got him settled.) Of course, we quickly realized that Home Care wasn’t reliable and that we were on our own. This meant that every 3 hours, one of Dad’s kids had to be available to ensure his comfort.

All the comings and goings of different people, the worry, and upheaval took its toll on our Mom. Arriving in the early evening to spend time with the two of them, became almost hysterically funny (probably due to fatigue…) Dad, at this point was snoozing his days away, and his wife was staying put in the apartment to be there with him at all times. We’d arrive, planning to keep Dad awake for a couple of hours before bedtime, and Mom would have verbal diarrhea. As my husband would ask his Dad questions and start conversations, his mom would jump in and answer over top of Dad or take off on a tangent of her own. It was humorous to watch the dynamics. Dad would just close his eyes and wait for her to finish, Mom would continue on- not getting it, and my frustrated husband would discipline his Mom for answering for her husband. Comical? Oh yes!

As the days passed, Dad became completely immobile and Mom was showing signs of being worn out. Our extraordinary Dr. made house calls and informed us that when we felt ready for him to leave the apartment, it would be a one-way trip to the hospital. When the morning came, and the ambulance was called, it happened so quickly that my husband just arrived at the apartment as they were loading his dad onto the stretcher to transport him to the Palliative Care Unit.

The kids were scheduled first thing to meet with the head nurse of the Palliative Care Unit, and she informed us, in haste, that their initial view of Dad’s health was that he wasn’t exhibiting “end of life traits” and that the longest average stay in Palliative Care was 7.5 days. My husband responded aggressively, (Of course he did! And that’s why I ended up doing all the meetings with the social workers and nurses….) stating that we assumed our Dr. would be making that particular call. She replied that the TEAM made those decisions (which included our Dr.), as the rooms were reserved for those patients about to pass within a matter of hours.

They only had to keep Dad overnight to understand the stage he was in. We had made the right call and as our Dr. put it so nicely, “He showed the signs of being “restless“ during the night.” (We didn’t even want to know what that meant!). They assured us the next morning that he, indeed, was in the right place requiring conscientious nursing care… and that is what he received!

We all felt it was the right decision, but Dad’s move opened up a whole new set of concerns. Of course, Mom intended to be at her husband’s bedside as much as possible. Thus more scheduling had to be coordinated to get her to and from for lengthy time periods. However, it made it all worthwhile when we’d wheel her to his beside, and Dad would open his eyes and sigh with a contented smile, knowing his precious wife had arrived.

Mom’s a diabetic on insulin, and emotional upheaval can trigger reactions, as well, like low blood sugar. We were all nervous the first night she would sleep alone in the apartment. Mom had never stayed by herself before and she was fearful of this. Her caring daughter slept over with her the first couple of nights. The third night, just before snuggling into her own bed, she received a frantic call from her traumatized mother. Mom blurted out that there was a male spook in the apartment! What the heck? Her mom was instructed to get out of bed and inspect the apartment, pushing her walker while staying on the phone line. As she made her way out of the bedroom, she heard someone knocking on her locked door, asking if she was having a problem. Why had she heard a male voice, repeating, “Hello? Hello?” I’ll tell you why… We had insisted that she wear her medic-alert necklace around the apartment, in case of a fall. She took it to heart and mistakenly wore it to bed. Of course she rolled over on it in her sleep, and set it off! The SPOOK MYSTERY was solved.

Another evening, after spending the entire day in Palliative Care, Mom had a mission. Weeks before, Dad had apparently voiced a request to have one of his mother’s butter cakes. Of course, without him to help her make the cake, she hadn’t been able to get it done. Now that he was in Care, she was determined that we’d go back to her apartment and assist her. (Dad had not had more than a couple of bites or swallows a day for the last few weeks, but she was determined they’d be having cake and coffee in his room the next day!) Of course, by then it was early evening and the reluctant senior kids, went home with her and helped prepare the batter. By the time the kids made it home that night; they flopped into bed exhausted! You’re wondering if Dad enjoyed his butter cake, aren’t you? He did swallow a couple of morsels and washed it down with a little coffee. It didn’t matter. His wife had something she needed to do and her family enjoyed the cake with him.

For the next few days, Dad slept most of the time, conserving his energy, and we hung out with him in his room (watching him snooze). He had some unfinished business and he wasn’t going anywhere until he had everything in order (organized to the last moment). He had us call the Pastor, once again, to drop by the hospital, as he had some final requests to make. Mostly sleeping during our visits, but the minute the Pastor walked in, Dad’s eyes opened and he carried out his meeting regarding particular details for his service. The little control freak even made demands about what the Pastor was to wear. He wanted a black suit with a black tie… (This organization and control appears to have shown up as a family trait with his own senior kids… I’m just saying …)

Opa, as well, waited to have his final visits with his grandsons. When they arrived for the weekend, he was awake and ready to chat, intermittently. What we didn’t expect to happen, was that two days later after they’d ferried and flew home, he appeared to rally. And just as the head nurse said, on the 6th day, they moved him to a room with another patient, as they required his room for another family. On the 7th day, we were stunned to find out that we would be moving him up to the 5th floor of the hospital.

Now, that brief stay, my friends, will be the next post of Tender Tuesdays. Let me just say, you’ll understand why his stay was brief on this part of his journey!

I’m sure many readers have experienced similar situations, as a loved one is admitted to Palliative Care. The nursing staff was incredibly supportive and caring, and we are grateful. Please leave a comment below and share some of your stories with us. I’m sure you’ve had some TENDER MOMENTS of your own.