Welcome back to Tender Tuesdays! This week’s installment moves forward with our father’s brief stay on 5th Floor of our local hospital. As you’ll recall, we’re the senior kids caring for parents living long and healthy lives- many surpassing the more normal 100th Birthday milestone. This is the new norm!

Picking up from last week’s post, our dad was being moved out of Palliative Care and sent up to 5th Floor. We went up with him, the orderlies pushing his cot through the crowded hallways into a room with two beds. When we arrived, the nurse who accepted our father, was curt, ill-prepared, and had no intention of getting to know the man being moved to her ward. She settled him into his new bed and disappeared. We were left to fend for ourselves. Really!

Of course, the first issue we faced was how he was supposed to communicate his needs, when they had put a CALL NURSE push button under the sheet and expected him to be able to use it. His hands and arms resembled Popeye the Sailor Man’s, so that wasn’t going to work. And, after several requests to have the call button replaced with a remote; one was never found.

The second new reality that hit us was his emergency need to use a bedpan. The nurses in Palliative had come regularly and helped him privately, reserving his dignity. NOPE, not so on 5th Floor. My husband dispatched ME (of course he did…) to find a nurse and get some help pronto…. GOOD LUCK! There were all kinds of workers on the floor, but it was impossible to tell who was a cleaner, an aide, a nurse, or a doctor. All of them wore pyjama-like attire and they all had their eyes glued to computer screens (mobile computer stations along the hallways and at the nursing station). I was frantic, knowing how upset our dad would be, if I didn’t get a bedpan to him soon. No one wanted to look up and acknowledge my presence. When I finally did get noticed, I was told that they didn’t have the time to be running in and out with bedpans and that he would be wearing DEPENDS from now on. Okay, not exactly what we were hoping for, but not our battle to fight… At least I didn’t think so, until, that is, my sister-in-law came to visit that evening, and found her dad lying exposed to anyone passing the doorway. No one had thought of drawing the curtain while he was using the bedpan or covering him with a sheet. Shocking, isn’t it? (Let’s just say, they found out immediately, from that moment on, what our expectations were for our dignified father’s care!) Oh how we missed Palliative Care with their wonderful bedside manner!

No one wrote any instructions for his care on the communication board that first day. He was still not eating and drinking much, but he was more awake and certainly required attention. Let’s see…no water, no straws, and no Kleenex box (required to catch the mucus during coughing fits -whether it gave his guests the heaves or not)! No sponge swabs for his lips and mouth, and no lotion offered for his chapped legs and arms! We were on our own to scrounge the basic requirements for his comfort.

When the dinner tray was delivered, of course he’d finally drifted off, after his traumatic move. No one even inquired whether he was capable of feeding himself (which he absolutely was not). It was quite an introduction to hospital care for the elderly!

They weren’t interested in getting to know our dad as a person. It worked for them to have the family taking shifts to be with him, assisting during meal times, toileting, and caring for our dad. (They took out his false teeth one night and never bothered with them again.) And don’t even ask if his “bed hair” was combed by anyone besides his daughter!

He had rallied his way out of Palliative Care, and he was awake and cognizant of his surroundings. He was able to carry on lengthy conversations, and this non-complainer started to complain! He had no trouble voicing his annoyance with his roommate’s cell phone calls in the middle of the night! His appetite and thirst improved so much, that he actually requested a beer. A real GERMAN- right to the end! I know, right? His daughter snuck a beer onto the ward that night and he downed almost the entire can! He really was parched! 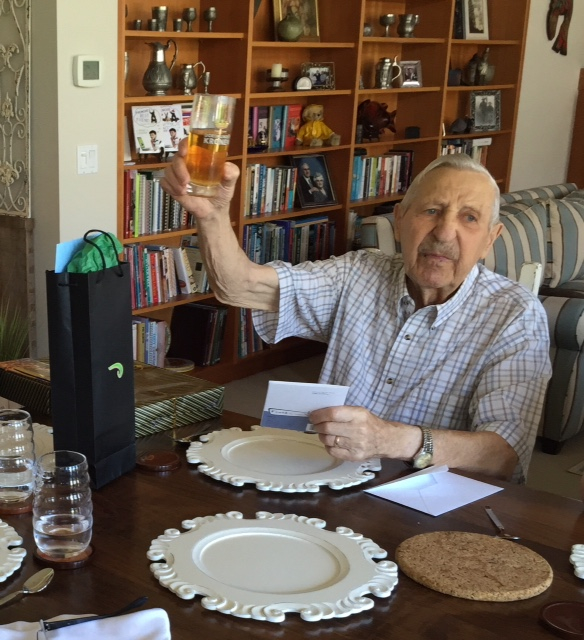 What the nurses did have time for was setting up appointments for the family with the Social Worker. When you come to the 5th Floor, they want to make sure that you realize that this will be his level of care until he passes, if you don’t secure a bed in a Complicated Care Facility (new name for Extended Care…). If you started the paperwork for a subsidized bed, the wait list is long and he’d have to stay on 5th Floor until there was an opening. The other option was to discharge him and move him into a private care facility. Let’s just say, we didn’t need much time to act. There was no way the family could have him stay in that environment for any length of time. We secured a room for him in the same complex that they had their independent living apartment. Dad was going home!

As we approached the Nurses’ Station to inform them that Dad would be moving to private care, my husband noticed a prominent sign posted above. It stated something like this:

FOUL LANGUAGE AND AGGRESSIVE BEHAVIOR TOWARD HEALTH CARE WORKERS WILL NOT BE TOLERATED IN THIS FACILITY.

We both looked at one another and I knew my husband (somewhat like his sister…) would have something to say about this sign. He commented, “I’ve never seen a sign like that posted in a public building before.” The nurse replied, “You’d be surprised at what we deal with in hospitals. Health care workers take more abuse by the public than any other professional body.” Our eyes met, as we replied, “REALLY!” in tandem. (Translation: “We have no doubt.”)

The questions we asked ourselves from this portion of our journey with Dad, included:

Our gentle, kind, polite Dad didn’t feel cared for on the 5th Floor and his dignity was compromised. He may have been seriously ill, but he wasn’t on medications and he had a sharp mind. He knew that they weren’t caring for him properly and he just wanted to go home.

We’re still confused by the contrast between Palliative Care and 5th Floor care in the same hospital facility. At least our Dad enjoyed his beer during his stay, and we had more time with him, before he fell asleep forever.

I know that many of my readers have had “hospital experiences” – some good, some bad, and some probably downright ugly! Please share your stories with us in the COMMENTS section below.