The Y KNOT Gets a NEW Name!

Husband and Prairie Girl just didn‘t like the name of their new (old) boat. The Y KNOT was just a little too common, even though they could justify it as a cheeky response to their impulsive sailboat purchase, in the first place. They’d had several brainstorming sessions over the winter months, trying to find the “just right” name, but to no avail.

Finally, their scheduled two week cruise mid-summer arrived, and the Y Knot had been provisioned, complete with a new shower bag to use while in anchorages. The crossing from West Van to the Gulf Islands was smooth and everything seemed perfect. (Seemed is the key word here.) They had their sails out on their way to Montague Harbour, when suddenly the wind came up and husband quickly determined they had too much sail out for them to handle. He immediately called Prairie Girl to take the tiller (oh sure…), as he climbed up on the cabin to reef the main sail. The wind was whipping them around, and Prairie Girl had no idea what husband was yelling for her to do. Their caps went flying off their heads- gone! The shower bag warming up on the deck- gone! Things started to crash below and anything not secured- gone! Prairie Girl had the urge to run down to the V Berth and hide her head under the covers, but she was too afraid that husband would be – gone, as well! Husband knew what he had to do, Prairie Girl… not so much. She clutched the tiller with all her might, certain that they were BOTH going over, just like their brand new shower bag!

Once again, the SEA GODS took pity on Prairie Girl and miraculously, husband got the sails reefed and recovered the tiller from his shaken wife. (She didn’t even know how to start the engine, at this point!) Amid some freaked out ramblings… Prairie Girl announced that she had the new name for their boat… ON EDGE!! Not only was the boat ON EDGE as it heeled over in the wind, but Prairie Girl was completely ON EDGE from the near MOB experience, as she considered husband falling in. Obviously she wouldn’t have known how to save him, so she surmised she’d have jumped right in after him!

That evening, safely tied up to a mooring ball in the calm after the storm, Prairie Girl and husband toasted to the renaming of their boat, “To the ON EDGE! ” (Prairie Girl continued feeling a tad ON EDGE sitting in the moonlight. Was she really destined to be a sailboat owner? Really? It’s pretty sad when a girl lived through such a major distress and couldn’t even take a shower! 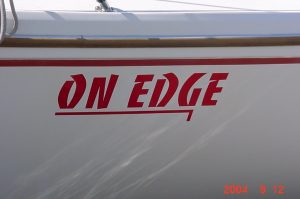 Beginner sailors have so many stories like husband and Prairie Girl. Won’t you leave one of your stories with us in the Leave a Reply box? You’re probably asking yourself how Prairie Girl could possibly publish a book in the context of “Family Sailing Vacations” ?! You’ll be pleased to know that in the About the Author page of WHO’S the CAPTAIN?, I admit that I’m no expert and never vacationed on our sailboat with children. The cartoon vignettes will amuse readers of any age group, as we’ve all been there in some way or another on our sailboats!