My kitchen has been transformed into a Kombucha factory! Before I know it, husband will be starting up a new business.

Some of you reading this may not even know WHAT this brew actually is! Simply defined: it’s a fermented tea, that hasn’t, necessarily, a “proven” health benefit… Nevertheless, husband is holding onto the miracle of hair growth- preferably on the TOP of his HEAD! So far I’ve noticed a significant sprouting of new growth hairs: nose hairs,… nostril hairs,… ear hairs… since he started up his KOMBUCHA production process.

Nonetheless, husband’s persevering, even though he may have just missed that opportunity with his timing. Hopefully it isn’t too late for his fine- haired, balding wife!!

How did this whole thing get started? Well, we blame our wonderful friends from our Australian cruise. They spoke to us about this healthy tea that they started brewing, after taking a course on fermentation. Our friend swore that since she started drinking her KOMBUCHA, her hairbrush was no longer full of hair and she wasn’t finding any in the sink or shower. Now her husband, well he couldn’t actually say he had experienced the same benefits, but he enjoyed the taste and was sure there must be other benefits to be had. (Not quite sure what those might be… but…)

On a visit with our cruising friends, we were poured samples of this precious KOMBUCHA blend. DELICIOUS! REFRESHING! It even had carbonation from the fermented fruit (or ginger). We were sold! We couldn’t wait to get started. A SCOBY was carefully brought home to begin this new fermentation journey! You’re no doubt wondering what a SCOBY stands for, aren’t you? It looks like a slimy, white mushroom with tendrils… NOT that appetizing! (Symbiotic Culture Of Bacteria & Yeast) Can you see how my chemist husband would be all over this? He was motivated to perfect this process to produce the ULTIMATE BATCH! 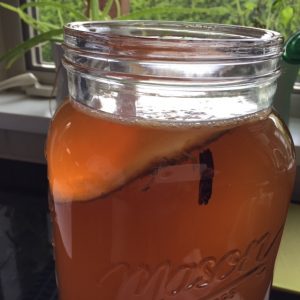 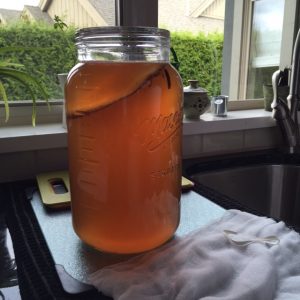 A book was purchased and research was done to augment the notes that our friends had supplied us with, along with their fresh, healthy SCOBY. 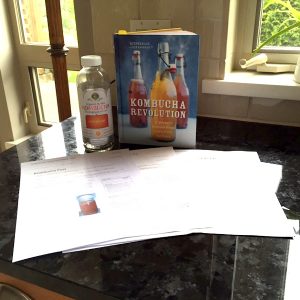 Husband was thorough and made sure we had all the equipment necessary, including green teas & herbal teas, organic cane sugar, and fresh ginger.

Large wide-mouthed jars were purchased – some empty and some filled with pickles! (WHO is going to eat all those dill pickles?!) 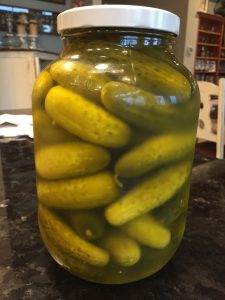 His gigantic German beer bottles were emptied and cleaned (such a hardship for husband!). He assured his wife they were ideal for the Second Fermentation process because of the secure lids. 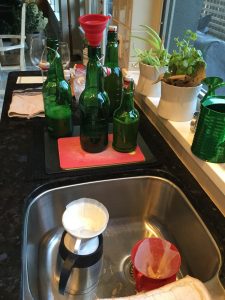 A special Log Book was set up for recording:

Apparently we had to find out about the carbonation level the HARD WAY! The first explosion happened in the laundry room while husband was home alone. He had a major clean up – floor, counters, window and cupboards. One might think that I’m a little slow after hearing about this because 5 days later while husband was away for the night, I opened a new bottle in the kitchen before heading to bed. Just as the KOMBUCHA exploded EVERYWHERE... poor husband called to say goodnight. Yep, you can imagine my DAMPENED response, can’t you? Could it have been somewhat COLD and FROSTY?

He’s now on his 6th batch and production isn’t keeping up with consumption. He has set up a SCOBY HOTEL so that he can make multiple batches at a time… (We’re obviously going to have to buy a new fridge to keep up with production!).

Husband insists on inviting neighbours and friends in for KOMBUCHA tastings. Of course, we both ooze of enthusiasm for the taste and the benefits. Last weekend we had a couple over for bridge and he really “took ” to the tea. The next morning an email arrived with a subject line, “THAT BLOODY TEA!” and a selfie attached. 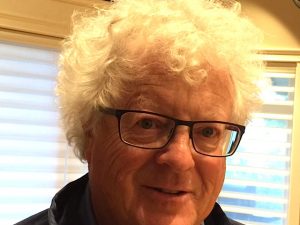 Husband is looking smug these days, He’s certain the KOMBUCHA is going to create a miracle… I’ll keep you posted on how that’s working out for us!