WILL WE EVER SAIL AGAIN? 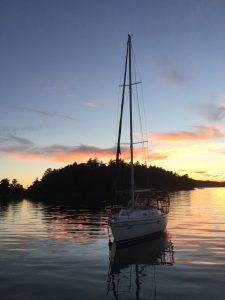 Last year’s sailing season turned out to  be a bust for husband and Prairie Girl. Husband had a 2 week window in his incredibly insane work schedule. And wouldn’t you know it? On their first night out, anchoring in a local, familiar bay- they hit a ROCK! (Refer to Prairie Girl Series #1 2016/07/27 in the archives.)

As you’re aware from former posts, husband’s 93 year old mother was hospitalized the week that he was discharged from the hospital after his emergency surgery. Let’s just say, the TwoCan wasn’t getting any attention whatsoever, the entire spring! (Other than the new installation of a windlass and a bigger dinghy…) Sadly for their family, husband’s mother passed away on July 1st and her Celebration of Life was arranged for mid July to enable family members from”off-Island” time to travel and attend.

3 days after family had left for home, husband looked at Prairie Girl and said,“Let’s get out on the water!”  So they quickly packed up, with minimal provisioning, and made it down to the marina by 8:00 pm that night.  (Can you tell they were anxious to be out on the TwoCan and leave all the stresses of last year behind them?)  They slept in the marina that night and headed South through Dodd Narrows at slack, early the following morning. They were finally on their way!

They tied up in Ladysmith, with the plan to spend just one night and get themselves organized.NOT! The minute they arrived, HARBOR ROT set in, as the weary, burnt out cruising couple realized that they’d been going 24/7 for the past year and a half.  They simply stopped! They tied up for 3 nights and slept, ate, slept, walked, slept, enjoyed a glass of wine or two, slept…. you understand. They were both emotionally and physically spent.  So, 4 days into their holiday, and NO SAILING YET!

The next 3.5 weeks turned into a very different cruising experience than husband and Prairie Girl had ever experienced on the water.  It became a social holiday where hook-ups with yacht club friends were organized along each leg of the cruise. (Gotta love that texting!)  Never before had they left the dock without a clear plan of where they’d anchor or tie up each evening. Only a couple of events were scheduled beforehand . The first one was  a rendezvous with a group of friends in Port Browning for a birthday party…(NOTICE NO MENTION BEING MADE OF THE AGE OF THIS BIRTHDAY BOY!) 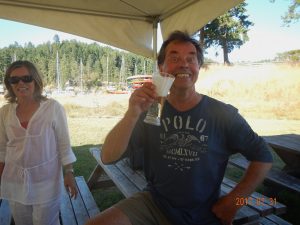 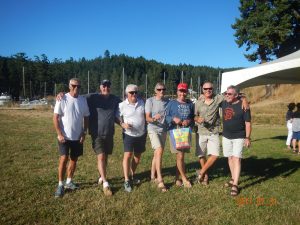 And the second event included a group of their sailing friends docking in Victoria Harbor for the BIG SPLASH (an annual event where the Symphony performs out on a barge in the middle of the Victoria Inner Harbor. (Of course Prairie Girl was looking forward to this part, in particular, …the restaurants… the shopping… a concert…good company…UM HMM….)

Well, things didn’t evolve the way they should have- do they ever?  After a weekend of anchoring with another couple, husband and Prairie Girl freaked out when a  shriek occurred, as the motor warmed up.  Their first reaction was that something was caught in the propeller.  Nope- that wasn’t it! By the time they arrived at the dock in Port Browning, they knew the shriek was related to the  transmission and so did everyone else greeting them for the Birthday Party.  Ever diligent husband started tracking down local boat mechanics for their advice.  Any of the suggestions given did not solve the problem, and motoring to Sidney, made the TwoCan sailors somewhat apprehensive to shut off the motor…. ONCE AGAIN- NO SAILING YET!

TIme spent in one of their favorite marinas, became one of interviewing other sailors for a reputable mechanic.  He listened to their woes and said not to let this ruin their cruise to Victoria over the long weekend, but for insurance, the wary sailors booked an appointment for the transmission to be replaced upon their return from the concert. (In the meantime, Prairie Girl was becoming suspicious when she caught up with husband talking to a boat broker about a brand new 34 foot BAVARIA. Hmmmm…..)

Friday morning of the long weekend, the happy cruisers rose early and were out on the water before the current would begin to flow against them.  Half an hour out, the transmission continued to make wicked screeches that completely rattled their nerves. They could just picture themselves dead in the current and wind, heading for the rocks. (Well at least that’s what Prairie Girl envisioned!)

A hasty phone call was made with the mechanic instructing them to tie up behind his business. Of course it was in LOW LOW TIDE and a narrow little passage way in.  Naturally, as the depth meter read 7 feet- then 6.5 and even 5.6… Prairie Girl on the bow was reliving last year’s rock episode- OF COURSE SHE WAS!  Somehow they docked.  At which point they were told that they must vacate their boat over the long weekend due to Insurance (or lack of).  So, already a couple of weeks out on the water and ONCE AGAIN- NO SAILING YET!

The weary cruisers gathered up their laundry and toiletries and headed for home on the local bus and Greyhound. They had to drive back to Sidney the following day to take off the perishables in the ice box (Note: Prairie Girl didn’t say fridge…) This didn’t phase them one bit- if they couldn’t attend the concert the next night, they could at least meet their friends for the TAPAS dinner planned, couldn’t they?

Everyone gathered on the SCYC Commodore’s boat. The girls (except for Prairie Girl) had shopped and were all decked out in new summer outfits (mostly white). The GROUP OF 10 was excited about their culinary adventure as they embarked on the walk to the restaurant.  When suddenly, shrieks and shocking expletives erupted on the sidewalk.  Yep, two of the lovely girls in white had been dive bombed on a busy Victoria street by a nasty sea gull.  A mother with a child in a stroller was accosted for baby wipes and the clean up began.  Amid the craziness of the situation, no one lost their sense of humor.  Did the girls insist on going back to their boats to change?  NO WAY!  They walked tall and continued on, headed for the restaurant washroom for another attempt at clean-up, and then they sat down and enjoyed the perfect night like everyone else.  True Grit! Good Sports! Memorable dining experience... BUT STILL NO SAILING! 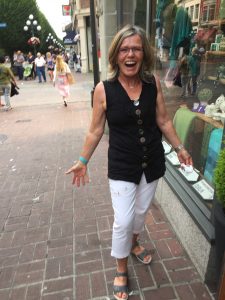 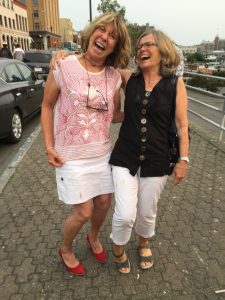 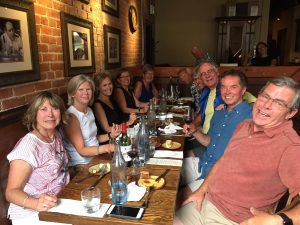 Five days later, the TwoCan was boarded and the wary couple motored to Sidney for the night- just to make sure the mechanics had indeed fixed the transmission.  Everything appeared to be working well and no shrieking was evident (Prairie Girl’s nerves couldn’t handle it!) The BAVARIA was forgotten and the happy cruisers made plans to meet up with friends for a night in Todd Inlet. Again, they motored to make doubly sure all was well. No issues occurred. They then decided to take another week on the water and finally get some sailing in. And they would have had a nice sail, except out of the blue- the volt meter and tachometer started jumping back and forth.  Husband was mesmerized watching the needle pulsating intermittently. Calls were hastily made, once they tied up in Mill Bay, to see what the mechanic could make of it.  He didn’t believe it was the solenoid, as it had been replaced at the same time as the transmission. (I know, dear readers, that you’re amazed by Prairie Girl’s mechanical knowledge, by this time.)

It was decided that they should try to get to Ladysmith and have a highly recommended mechanic look at it.  Of course he was far too busy and suggested that they should motor through Dodd Narrows the next morning and get the TwoCan back in it’s berth.  So, once again, they apprehensively did just that while the volt meter continued to pulsate back and forth.  SO MUCH FOR SAILING!

Once back in their berth at the marina, husband questioned everyone on the dock for a good electrical boat mechanic.  After about a week of this, a busy one was secured.  Finally, two weeks later, the problem is fixed. Was it the alternator?  Nope!  It was the solenoid that had been installed improperly. That’s right! So now on the last week of August, Prairie Girl actually plans to get out on the water and finally do some SAILING!  (That is if they still remember how… its been two years, after all, since they actually sailed their TwoCan!) 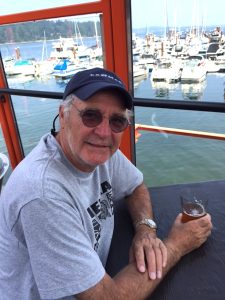 Hopefully, you have had better luck than Prairie Girl and husband this summer and NONE of you have had mechanical issues on the water…   Tell your story in the LEAVE A COMMENT section… PLEASE!