Prairie Girl knows that you were starting to think that she and husband never actually raise their sails… Admit it- you were! Well, seriously, with all the hurdles involved in getting out on the water this summer, including illness and loss of very dear family members, reduced strength requiring a new windless installation, Prairie Girl and husband finally made it out mid-July to find themselves experiencing a pesky transmission issue. And just when they thought they had that fixed, the instrument gauges started to go mad.  Back home again to find a mechanic to solve that mystery.  This only took a couple of weeks to get someone down to the marina to tell them the new solenoid installation was faulty. Finally, the anxious couple were set to embark on a week of sailing on the Sunshine Coast.

Not yet used to their new marina, it only occurred to them to check whether Whiskey Gulf was active or not, as they were positioning themselves to sail across the strait in a direct route.   Of course, it was active that day and now the crossing of the Strait of Georgia was going to take more time than ever. (So much for their plans for an early arrival). The winds and current were against them for the crossing, so the happy little sailors endured the motor the entire way to Secret Cove.

They know what you’re thinking… still no sailing! Their intention was to  sail over to Pender Harbour the next day.  Right! It was the long weekend and the temp was 32 degrees with not a wisp of breeze to be found.  STILL NO SAILING!! So they practised their new anchoring skills with their windless off the beach in Buccaneer Bay on Thormanby Island, instead.  Hanging out on this delightful, beautiful Island was certainly no hardship! 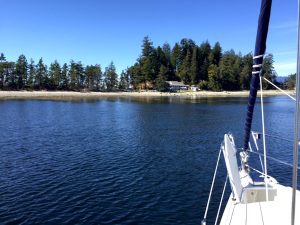 NOT A RIPPLE ON THE WATER

Arriving at John Henry’s (Pender Harbour) in the midst of the heat wave, the cruising couple were somewhat mystified to be the only boat tied up to the l-o-n-g dock the entire night. Where were the long weekend crowds? Is the first of September the cut off date for cruisers? Again, not a ripple on the water… STILL NO SAILING!

Labour Day, the couple headed for home.  Leaving Pender Harbour, the ocean was smooth as glass- seriously! However, as they motored out of the Melaspina Channel, the winds picked up and for the first time all summer, Prairie Girl and husband had  a good 14 knot wind, enabling them to RAISE THE SAILS. Prairie Girl was certain her readers wouldn’t believe it without some evidence, so these photos are the proof.  Yep, the happy couple shot across the strait at a steady 5.5 knots and made it back to their berth at Stones feeling content and buzzed about their awesome afternoon on the water.  FINALLY!  THEY SAILED! 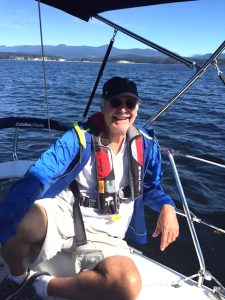 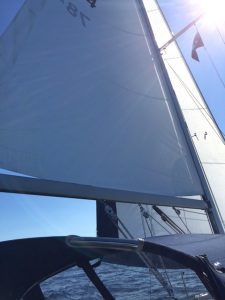 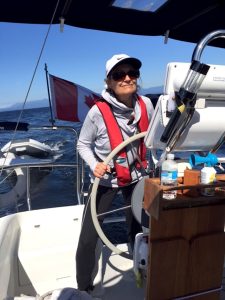 Prairie Girl Helming
(Quite a grip on the wheel…)