Reply: TwoCan   This is Duchess of the Seas   Go to Channel six eight   Over

Response:   Duchess of the Seas    This is TwoCan  Roger six eight  Out

After switching to the working channel six eight:

Establish Contact:     TwoCan   This is Duchess of the Seas   Over

(To be continued at the end of this post. You know you want to read the final portion of this transmission!)

Sounds simple, right? You’d think a former principal who was relaying information to staff and students daily over the PA SYSTEM would not find using the boat’s VHF/DSC radio to be intimidating. So what was the big deal when Prairie Girl signed up for a ‘one day maritime radio course’ through her local Power and Sail Squadron?

The first bit of apprehension set in when husband and Prairie Girl joined the yacht club and on their first sail across the Strait, a fellow member (a retired traffic controller and examiner of the radio course ) called us. Husband handled the reply to the call out well, as usual, except when he ended the transmission with OVER AND OUT. Well, didn’t he hear about that faux-pas when they made it to the dock?

Actually, there are a number of retired air traffic controllers in their club and it’s easy to determine who they are from the sexy professional tone of their transmissions. When one can sound so good on the radio, Prairie Girl knew her high pitched female voice wasn’t going to cut it!

Then there was the walk with her girlfriends (also members of the Yacht Club) when she explained that she’d signed up for the one day course and had just picked up the somewhat technical manual and CD with 10 days to prepare for the course. They were so surprised that the entire course could be accomplished in one day of training. Apparently when they had taken it, it was spread over several weeks of night classes. This started to give Prairie Girl the jitters… especially when they mentioned there would be an oral exam and a multiple choice paper exam that same afternoon. Well, didn’t Prairie Girl have some studying and rehearsing to do? 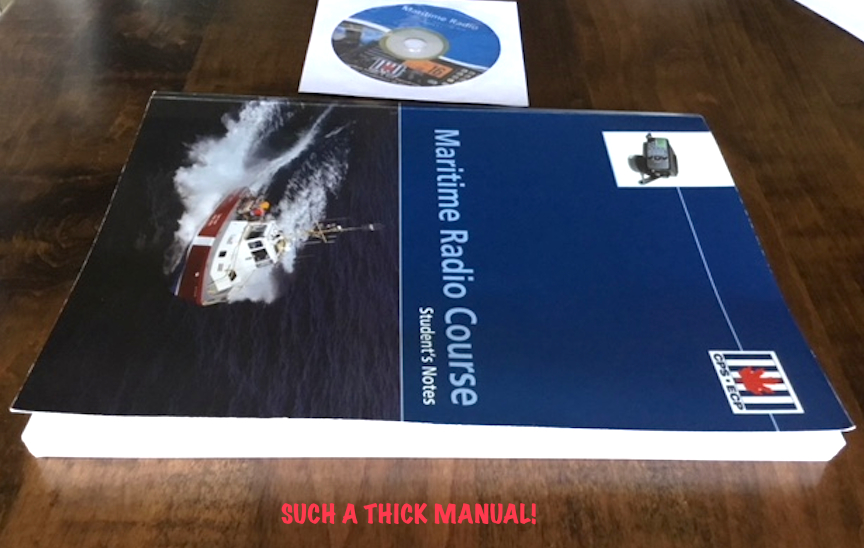 Of course, she took to the marine alphabet words for sketchy transmissions without a blink. She remembered practising them with husband when he had taken his Power Squadron course years before. Interestingly, when she quizzed husband, he had several missing words…. perhaps he should have been attending a refresher course with her? 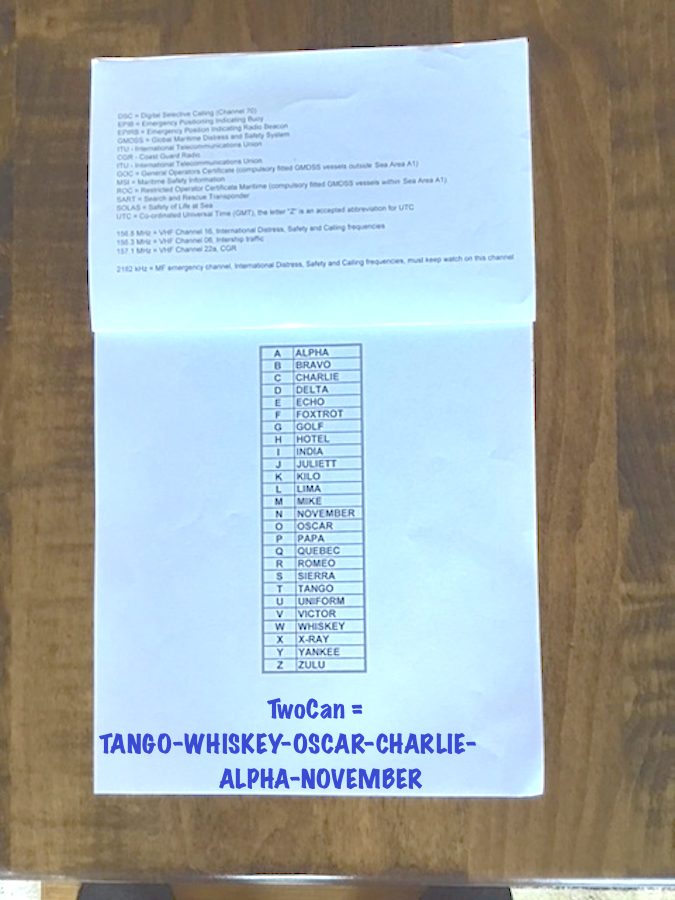 She decided to open the CD first- the manual just looked too technical… she needed to ease into this studying gig- after all, it had been awhile since she had had to prepare for a test. The CD had actual oral examples of the messaging protocals used for safety, urgency, and distress. Immediately, she had NO DIFFICULTY with the Urgency transmission. Afterall, hadn’t husband used it when they hit the rock in Mark’s Bay (Archives: Prairie Girl Series #1- 2016/07/27) the previous summer? She had that one down pat immediately. The others took a little practice.

In the week leading up to the RADIO CRASH COURSE, husband brought home the hand-helds and they did a little oral practising of the various radio transmission protocols. Prairie Girl found that just like with her writing, she tended to get a little wordy and detailed when relaying her message to the pretend Coast Guard. Husband lost patience quickly, so Prairie Girl didn’t push the oral practice part too far. By the time she took the class, she knew the key details to include in her transmission and when the oral part of the exam took place, it was in a highly supportive small group approach. Even so, Prairie Girl couldn’t help but to critique the quality of the participant’s voices. She definitely was NOT blessed with a sexy radio voice.

Notice that Prairie Girl kept avoiding the MANUAL?   She admits that she found Module 2 of Digital Selective Calling (DSC Radios) a grind. It had tons of technical info, and there were so many acronyms! e.g. DSC= Digital Selective Calling (CH. 70), EPIB= Emergency Positioning Indicating Buoy, EPIRB= Emergency Position Indicating Radio Beacon, MSI= Maritime Safety Information… you get the point. However, in spite of it not being riveting reading material, Prairie Girl persevered and made it through. She did the Sample Exam Questions and the results on Module 2 weren’t as perfect as those from the first section of the course. 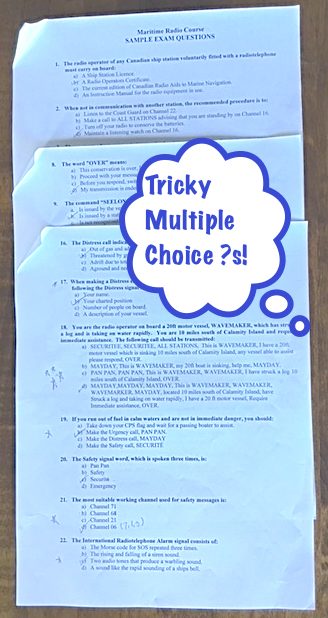 Course day arrived and to Prairie Girl’s delight, the material was covered in an entertaining and supportive presentation. The Radio Course students felt relaxed and found the day slipped by quickly as they motored through the material. No one appeared to have test anxiety when the exam was passed out… well no one except perhaps those who hadn’t yet cracked the manual or used the CD.

Prairie Girl has to admit that she felt a sense of pride that she now has her Radio Operators Certificate and will not feel shy about using the TwoCan’s maritime radio next summer. Their yacht club is probably going to rue the day that Prairie Girl took to the waves!

Response:   Duchess of the Seas This is TwoCan

(Relay message) Just wondering when you will be taking your dogs ashore for a pee-pee? (Or something like that!)