It is the beginning of May and Yacht Clubs all over the Pacific NW are celebrating their opening day of the boating season with a dignified Sail Past ceremony. Schooner Cove Yacht Club, located in Nanoose Bay on Vancouver Island, had such a day planned for their membership. Now if you recall from reading other Prairie Girl Learns to Sail posts and previous COCKPIT CONFESSION stories, Prairie Girl’s husband became Commodore of the SCYC in November, 2018. Of course, the Sail Past is something that all members and guests love to participate in with the dock ceremony and the parade of boats sailing past to salute the Commodore and the Commander of the Power Squadron on the water. It is always a stately and ceremonial affair.

Well! Didn’t SCYC greet the Official Opening of the 2019 Boating Season in a unique way this year? For those of you not able to make it to the ceremony, and perhaps were watching it from a deck above the marina, you had quite a sight! Everything looked organized, as usual, down at the After Deck, with our special bagpiper, leading Commodore Husband, the Nanoose Power Squadron Commander, and a number of Past Commodores down the dock to the Afterdeck. 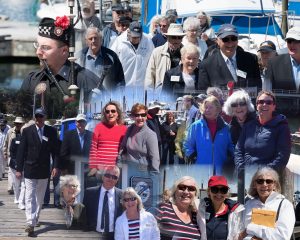 Spectators, watching from above, would have been unaware of what was being discussed down below on the docks. Husband had been down to the marina in the morning officiating the Sunday morning races. The racers had returned exhilarated after experiencing 25 knot winds. Husband wasn’t so sure that the captains would feel it was prudent to set out after the dock ceremony on such a blustery day. There were concerns that even the Commander’s anchor may not hold and wouldn’t that cause a commotion for the parade of boats saluting their Commodore and Commander! No one wanted to make the call until checking the winds at the last possible minute.

The Deck Ceremony went off as planned. Last year’s Past Commodore welcomed the other Past Commodores from previous boating seasons and the many participants filling the Afterdeck to the event. Our national anthem was sung (perhaps a little off-key) as the Canadian flag was hoisted. Commodore husband welcomed the special guests, the Commander and his wife, and the SCYC members to the 2019 Opening Day of the Boating Season. He also mentioned, a cautionary bit of wisdom, that a seasoned sailor had recently conveyed during an initial “shake down” sail aboard the Commodore’s TwoCan XL: “Make friends with your boat.” (This takes time when one is becoming acquainted with a new or previously owned boat, and since the author of this article hasn’t seen her Commodore Husband since the haul out of the TwoCan XL on March 7th, she’d say he took that advice seriously!) The guest Commander addressed how the Sail Past would proceed on the water. Now, those members who weren’t present will be dying to read the next paragraph because there was a completely different procedure for 2019’s Sail Past announced! 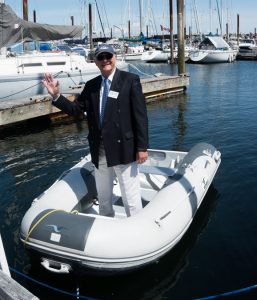 One of the Past Commodores came up with a brilliant solution to our gale winds discomfort. He suggested that it would be safer to man our boats, as usual, but NOT leave the docks. Instead, wait for the air horn to blast, and be ready to salute the Commodore and Commander as they zoomed up and down the fingers in a dinghy. What a crazy spectacle, those of you with marina views from your decks, must have experienced! 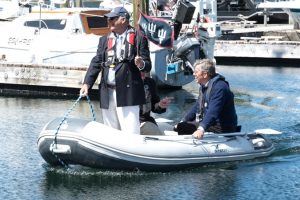 No one complained about the last minute decision and members took to their boats and settled in quite happily with bubbly and appetizers off their aft decks. Most people bring guests aboard for the Sail Past, so parties were underway, by the time the air horn sounded. Can you picture the dignified display of the well-dressed Commodore standing up at the front of the dinghy waving the Commodore’s flag as he was putt-putted along? (Word has it that the Commodore wanted to know if he perhaps resembled Washington crossing the Delaware?) 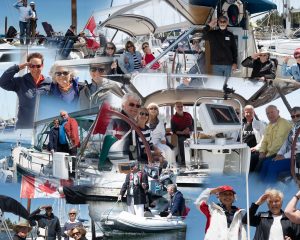 One member tried to get a close-up view of the prestigious dinghy as it flashed by her boat for the salute. This woman appeared over-anxious to salute our Commodore as close to the water, as possible. She practically fell ‘head over heels’ for Commodore Husband off the swim deck of the boat. Thankfully, she didn’t hit the water, but that didn’t stop the passing of misinformation along B Dock that it was a completely different woman who had fallen into the water! 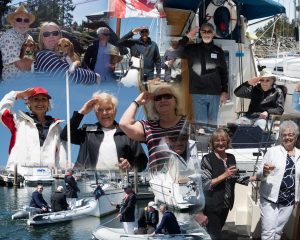 Just imagine the kinds of salutes that one receives from a DINGHY. The Commander commented that if there had been a prize for the BEST SALUTE, Lilly and Scout (members’ beagle puppies) would have been the recipient. 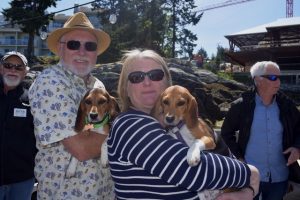 And then there was all the drama around the designated photographer of the event. Everyone was distracted (or entertained) watching her run, lugging her camera with the massive lens, as she tried to get to the next finger before the Official Saluting Dinghy zoomed off. Our poor photographer rarely caught up and was completely breathless by the time she did. She ran a marathon up and down the docks trying to find the perfect vantage point from which to take her photos. The Past Commodore steering the salute dinghy was no help, whatsoever, and was renamed, Captain Speedy of the dinghy. 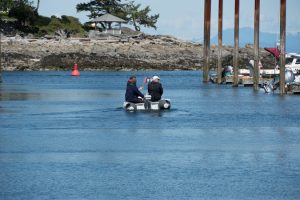 Now THAT was a unique SALUTE CEREMONY… 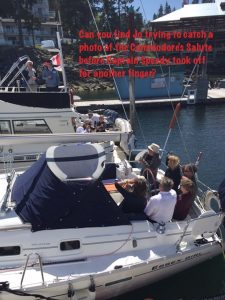 After dancing to a 19 piece BIG BAND orchestra in 40’s attire, holding a dance and costume contest, and enjoying a lovely dinner at Fairwinds Golf Club, reluctant SCYC members lingered to visit a little longer, discussing cruising plans and boat preparations with one another. The official SCYC Sail Past 2019 could go down in the historical yacht club records as the most unique one ever! Flexibility, fun and friendship replaced the usual formal traditions of the Start-Up Day. Everyone adjusted with good humour and a positive acknowledgement of the good time had by all launching the Opening Day of the 2019 Boating Season. 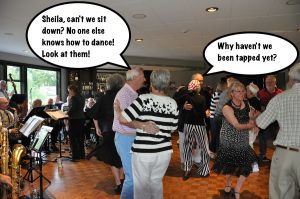 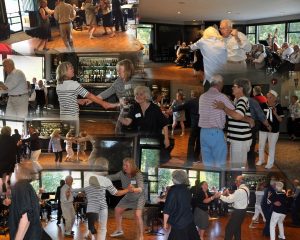 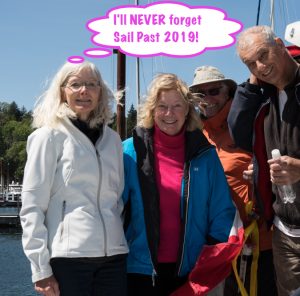 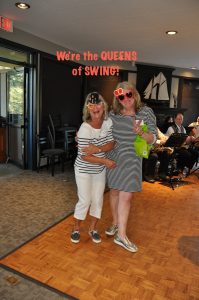 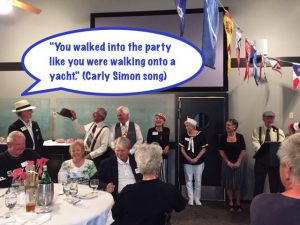 SAIL PAST is such an important day to Yacht Club Members. Prairie Girl  hopes your 2019 Boating Season Opening Day was as memorable and full of fun as SCYC’s!

Please leave a COMMENT below to tell us about your experience.  Have you EVER had to be as flexible? What did you do?

And don’t forget parents and grandparents who are preparing to boat this season with kids aboard.  WHO’S the CAPTAIN? is not only fun, humorous and entertaining, but it also reinforces nautical language through the cartoons and the cheeky glossary. This “little gem” can provide lots of discussion around safety, as the Captain and his family in the cartoons aren’t always choosing the safest boat procedures.  If you haven’t ordered your copy to have aboard this summer, do so now by clicking the link: http://www.amazon.ca.  The price of the book is only $14.99 in Canada.  HAPPY BOATING!