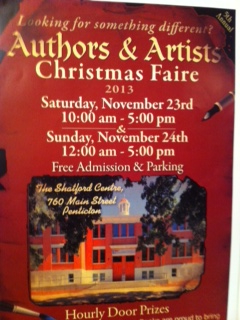 The trek to the PENTICTON AUTHORS and ARTISTS FAIRE started by taking a 6:30 am ferry from Nanaimo across to Horseshoe Bay.  Of course this was supposed to give us a head start on the drive to the Okanagan. NOT!  As expected, there was nothing but gridlock in the lower mainland. A couple of collisions had occurred. Surprise?  NOT!  Just the usual, when you live in Vancouver!  It always reinforces our decision to move to the ISLAND! Husband Ryan had gone out to purchase chains, certain we would end up in a snow storm. Thankfully, they weren’t needed! We drove in summer road conditions, except for the colder temperature. Island life is quite a bit milder … Are you getting the idea that I like my new location?

The main highlight of the trip was meeting such interesting and talented artists and students. Our first encounter was made by staying in a quaint B&B- Vancouver House with our hosts Jane and Bob. Our upstairs wicker room was cozy and quaint.(Jane just opened a home decor store, so you can imagine the decorating in their home.) And  Bob’s breakfasts?  Let’s just say, I’m not going to tell you how gourmet they were because I selfishly don’t want Vancouver House to be booked up when I try to return in the spring for more Raise a  Reader visits. (Promise you won’t let the word out.)

The event of the weekend  (after my fun morning at Okanagan Falls sharing my new book for Raise a Reader) was to set up for the annual Penticton Authors and Artists Faire. 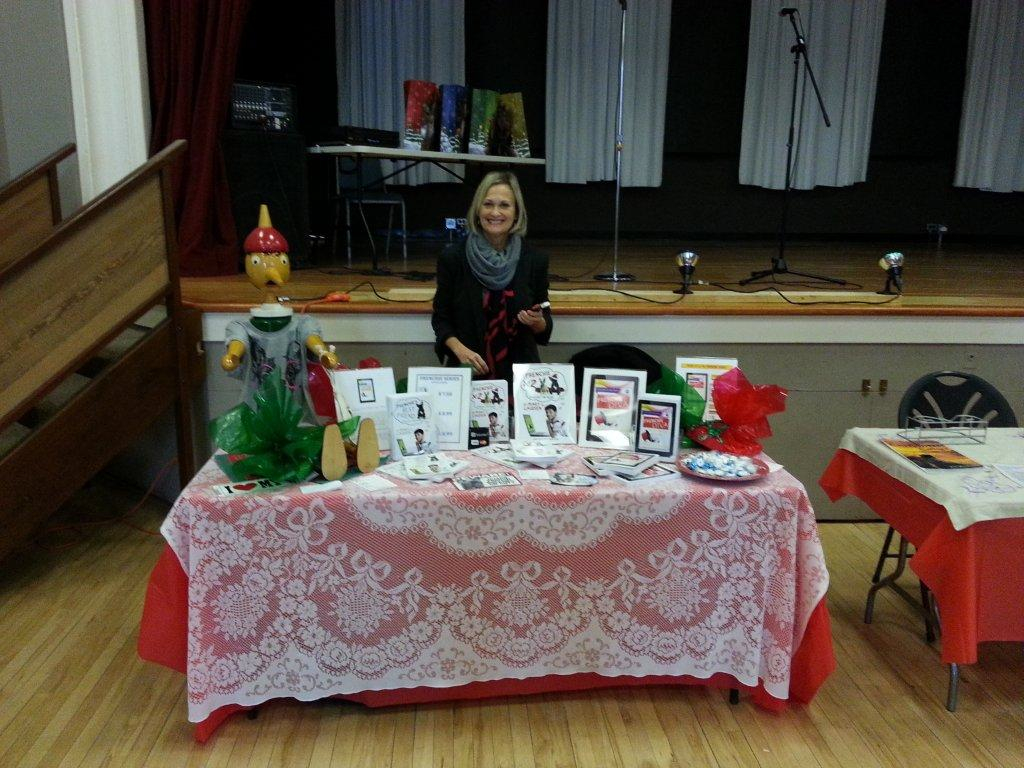 My Canadian Distributor, David Korinetz was a major organizer for the Faire.  He did an amazing job of scheduling us all in for talks, ensuring that there was an array of diversified talent with all different genres of books, and art pieces that certainly caught one’s attention. His work on publicizing the event through radio, newspapers, signs, and posters and preparing draws throughout the two days, was well organized and done all on his own time. David  not only distributes Canadian books, but he is also a writer, himself.  You might want to check out his Fantasy novels. (Chronicles of the Daemon Knights: FireDrakes, Sorceress, Halfling).  He looks like a fantasy writer, doesn’t he? Could it be the hat? 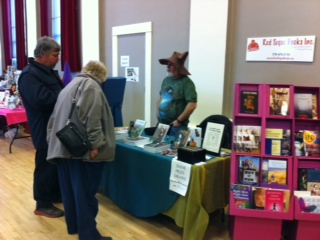 Ted Moore launched his new book, Tribute at the FAIRE. Ted had signings throughout the two days, as well as performed. His books tells the story of his journey with rock ‘n’ roll and how he became a successful Bon Jovi tribute artist.  Something he shared with the audience is that he actually hand-delivered his book to Bon Jovi himself.  (I keep wanting to connect with  CHER because of my Grandma Sis’s character… especially in Frenchie Diva!) The music these two rockers made was wonderful and spectators arrived just to hear Moore and interview him. 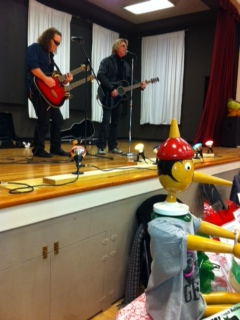 Another interesting artist that I encountered was Dennis Weber and his wife, Sharon. This Metis artist had some exceptional portraits on display. When we started to discuss some First Nations Artists that we both knew, he brought over a book he was selling that was a collaboration with the author, David Bouchard, entitled, The Secret of Your Name.  Well, weren’t we both surprised! The author he made the paintings for and portraits of was none other than my ex-husband. Of course he was!  Poor Dennis just couldn’t get over the coincidence!  You might want to take a look at Dennis’ portraits, they’re worth a peek.  They can be found on http://www.webergallery.com 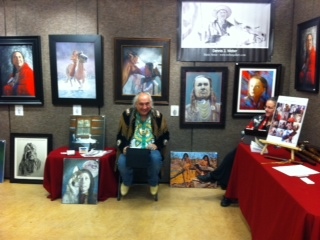 This is just a small glimpse into the many characters that I became acquainted with just by participating in the PENTICTON ART and BOOK FAIRE last weekend.  I didn’t even mention the many people who came to check out my books.  Everyone was so interested in my novels and the stories behind the inspiration for writing the Frenchie series.  It was a great experience and so validating as an author, connecting with readers. (I think I’ll try to make it back next year and renew these newfound acquaintances.)

If you didn’t attend this year, you may want to make sure you take an hour for this annual holiday event next November.  I’ll see you there!