A RETIREMENT PARTY on the WEEKEND… and a FUNERAL CONSULT 2 DAYS LATER!

Prairie Girl is certain that this Post Headline grabbed your attention! Seriously, it did happen and husband’s had nightmares ever since! (Please don’t think these two take the death of loved ones lightly- they don’t!) However, they do get themselves into predicaments without always anticipating the outcomes of their “in-the-moment” comments.

Last January when husband’s father passed away, Prairie Girl and husband met with the Memorial Gardens director to ensure that their father’s wishes were being followed. Husband was so thankful that he, his sister, and their mother weren’t burdened with making decisions to the BIG QUESTIONS. Opa had it all organized -even to the point of picking out the box in the wall where he and his wife’s ashes would be housed. (He referred to it as their new condo with a view!)

As they were leaving the meeting, husband made the comment to the Director about how much he appreciated the fact that his father had pre-arranged all the details. BIG MISTAKE! Shortly after Opa’s funeral, Prairie Girl started to receive calls from the director, attempting to arrange an appropriate time to meet and start their decision-making process in the event of their demise… for the sake of their sons, of course! Each time Prairie Girl received a call, she put the saleswoman off, as it was never convenient. (And that is true… 2016 was a complete blur for those two!)

So what happened the week before husband’s FREEDOM 69 PARTY? Prairie Girl received another call from the Memorial Gardens. She couldn’t lie and say they were going out of town, once again… could she? Of course not! Our principled Prairie Girl made the appointment for 2 days after their party. Hmmmm… 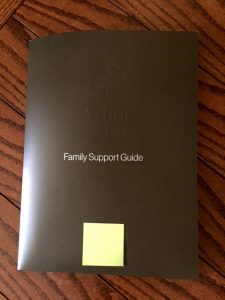 Well, didn’t they have an entertaining afternoon fending off the advances of the pressure tactics used by the Director to seal the deal? Prairie Girl kept having déjà-vu feelings of sitting in front of a time-share salesman in a high-end Scottsdale, Arizona hotel. OMG! She had an answer for everything… no doubt they’re highly trained in their sales pitches. Each time she’d start progressing towards a discussion of PREPAID PACKAGES… frugal husband and Prairie Girl would continue to repeat themselves. (They only came to get an idea of what could be arranged ahead of time… hopefully a very L_O_N_G period of time…. so that they could start to plan what their wishes might be.) For instance, they had a lengthy discussion about what one should be cremated in. They looked at her incredulously and said, “But why wouldn’t we just get cremated in a sturdy cardboard box?” She kept assuring them that their bodies would have to be identified before cremation and thus they’d need prep done on them for this viewing and really, the particleboard box was certainly unattractive and the lowest priced option available! Why would they need to be viewed for identification and why would they want to be “fixed up” if they were headed to the crematorium? So many unanswered queries? 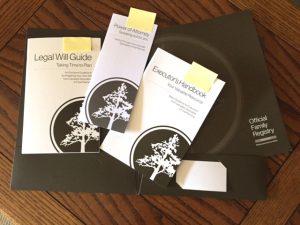 Then they got stuck on what to do with one’s ashes. They mentioned they had a sailboat and perhaps scattering their ashes on the ocean would be an option. Well, didn’t she have a comeback for that! “Imagine husband dies first and you’re in your 80’s, are you going to be prepared to drive your boat out on the ocean to do the deed? And what of snorting your spouse’s ashes as the wind catches them and blows them back inside your vessel?” At that point they pointed to a flying saucer container made of compostable cardboard with a sailboat insignia on the top. Husband thought that looked like a viable option, until Prairie Girl suggested it may not work from the dock, since she might be too old and decrepit to board a boat, and what would happen if it didn’t just float out of the marina, but ended up snarled in someone’s slip and dock lines or pushed up on a rock where it couldn’t disintegrate into the water…. FRAUGHT with difficulties, for sure!

Husband and Prairie Girl tried to get across the message that they weren’t concerned about a final resting place for their ashes. Their bio-degradable ash container (whatever that may be) would become part of the ground or ocean very quickly. At this point, the master saleswoman appealed to their sense of parenthood. “How do you know that your sons wouldn’t want to have designated spot where they know your ashes were buried? Many people cherish the time they spend with their loved ones during visits to the cemetery.” Well, weren’t the two of them amazed; this had not even occurred to them that their sons might possibly want to visit their ashes. (Is it significant to note that it’s hard enough to manage having visits while their parents are alive and well?!) Well, Prairie Girl folded at that point, and husband knew he was going to have to “suck it up” and enjoy the golf cart ride through the FOREST WALK. (The ashes are buried amongst the trees with a granite base and bronze marker depicting their spot.)

Having made it through the entire consult in a little less than 3 hours, the escapees jumped out of the golf cart, shook the Director’s hand, thanked her for her time, and told her they’d be in touch after mulling it over for a month or so.

As they gleefully climbed into their car and drove out of the gardens, they burst out laughing. How does someone celebrate their retirement with a party and two days later land up on a cemetery tour, planning for their demise? SURREAL!

It’s been a week now and husband is still reeling over the ‘deathmares’ he’s having. Prairie Girl doesn’t appreciate hearing about them, since she’s the one for whom he’s planning a funeral! Prairie Girl’s walking buddies have had them watch a Marketplace TV segment that describes the full-on up-sale techniques that the couple experienced… no pressure- ha! And Prairie Girl’s sons have been canvassed regarding their thoughts about a FOREST WALK semi-plot and whether they’d care if their parents landed there or elsewhere scattered. Interesting conversations… of course neither of them are on the same page. Mercedes salesman son just laughed that his frugal stepfather would put himself in a position to go through the high powered sales tactics of the funeral, cemetery business.

Oh gee… maybe they should just sleep on it for awhile longer… that would be good advice if only the ‘deathmares’ would stop!

Please leave a comment below.  AND please remember, Prairie Girl and husband do not take the loss of their loved one’s lightly, it was simply the timing of the meeting that set them off!…