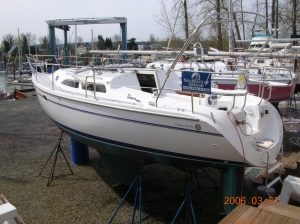 One can only state that husband has refined the skill of master manipulator. It’s called taking advantage of one’s situation. Husband was working away from Vancouver, B.C. for several months at a time, constructing a chemical plant in Vancouver, Washington. Prairie Girl was completely immersed in “PRINCIPALING” and somewhat oblivious to what husband was doing during his downtime. Evidently, he was searching out their next sailboat in Portland that offered the best deal. He had been a busy sailor! Who knew?

In retrospect, Prairie Girl should have read the signs. They did have a day walking the sea wall along Coal Harbor and just happened to chat with a boat broker who took them aboard a brand new CATALINA 28- Mark 11 ANNIVERSARY Edition. Prairie Girl loved it… especially when the inboard heat was turned on (it was March, after all). Husband mentioned that he’d been looking at boats in Portland and there was this EXACT model (minus the inboard heat, of course) available at a reduced price. Really? Imagine that!

So when March Break arrived and two of Prairie Girl’s sisters flew out for a brief visit from the prairies, husband suggested that a drive down to La Conner, Washington might be a nice way to spend their ANNIVERSARY. Of course, Prairie Girl innocently agreed to the excursion- after all it’s such a picturesque town even if the tulips weren’t yet in bloom. The girls went their way and husband went his- before meeting up for a mid-afternoon lunch.

Only husband sought and found Prairie Girl before the agreed upon meeting time, arriving totally animated and anxious to speak with her privately. Now readers, what would you assume he wanted to show her privately on their ANNIVERSARY? (She knows what you’re thinking… a small gift-wrapped box…) Nope- not a chance! Apparently husband’s urgency to get back down to the States wasn’t related to hosting the sisters. Oh no, he needed to get his hands on some boat brokers publication, as the Catalina dealership in Portland was closing its doors and would be selling off their remaining inventory at slashed/ reduced prices- including the Catalina 28- Marks 11 ANNIVERSARY edition. In husband’s mind, the universe had aligned and because it was their ANNIVERSARY they were meant to have the ANNIVERSARY edition… You follow this, right?

Well what could Prairie Girl say to that on her ANNIVERSARY? Husband had the phone in his hand poised to make the call that would SEAL the DEAL (sound familiar?). 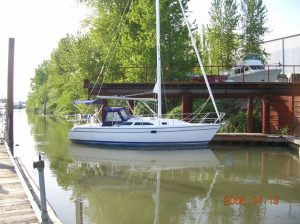 The call was made, the ANNIVERSARY EDITION was purchased and toasts were made over lunch with the sisters, as stunned Prairie Girl once more wondered how these little strolls turn into gigantic SAILBOAT PURCHASES?

What Prairie Girl needed to know was how their brand spanking new sailboat was going to arrive in West Vancouver. And what of the ON EDGE (their beloved first sailboat)? Prairie Girl had grown quite fond of their refurbished OLD TUB! Secretly, she knew this would be the ONE anniversary, husband would remember for life. HAPPY ANNIVERSARY SWEETHEART! Oh no! Their next ANNIVERSARY is fast approaching ( and the ANNIVERSARY Edition is now 10 years old)- should she panic?

Honestly, nothing feels better than when one is aligned with one’s husband and can equally share in the lovely experience of purchasing something that will enhance their lives, the way sailing has. Prairie Girl really has no regrets that there wasn’t diamond earrings in a small gift wrapped box that day… but that doesn’t mean there shouldn’t be on one of these ANNIVERSARIES.

P.S. Have you ordered your copy/copies of WHO’S the CAPTAIN? yet for all of your CAPTAINS’ X’mas stockings?  Search on Amazon.com, Amazon.ca, Indigo Books, Red Tuque Books….  Thanks for visiting FUN HAPPENS!